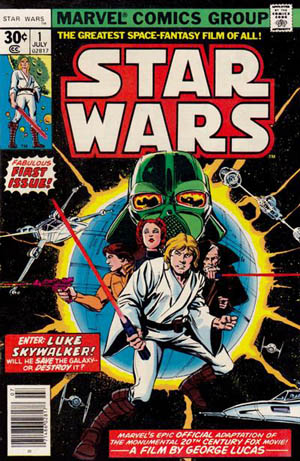 This was completed by Jaquandor. I’m going to do it anyway!

1. Which film is your favorite of the Original Trilogy?

I’ll steal Jaquandor’s answer, in part: “The one that started it all, Star Wars Episode IV: A New Hope. I know, most people consider The Empire Strikes Back to be the greatest of the Star Wars films, but for me, it’s the first one that always has that special something, the one that took us into that amazing universe for the first time.” BTW, I HATE the retronym numbering and naming of the first film released.

2. If you enjoy the prequels, which one is your favorite?

I saw Episode 1 and was bored to tears. Never saw the other two. And while I wasn’t thrilled by Jar Jar, he wasn’t as offensive as I thought – or more likely, I was told beforehand how TERRIBLY offensive he was, and the actual wasn’t as bad as the anticipation.

3. How old were you when Episode 1 came out?

4. Which of the movies have you seen in the theater?

Four, five, six and one, i.e., every one I saw. I want to say I saw the original at the now-defunct FOX Theater in Colonie, NY, but have no idea about the others.

5. Did you go to any of them on opening night?

The original I saw MONTHS after it opened, but it was still playing first run. I doubt I saw any of the others opening night since the number of films I’ve seen opening night, or in preview numbers about five.

6. Who is your favorite character from the Original Trilogy?

7. Who is your favorite character from the prequels, if you have one?

8. Have you read any of the books or comics?

I read the Marvel series when the original films were coming out. They were, as I recall, quite entertaining in that but they filled in holes that the movies left.

I have at least one novel, still, but it was long ago since I read it, and don’t specifically remember it.

I remember the first few dozen issues of the Marvel series than the latter ones.

12. Favorite villain from the EU?

13. If you had your own ship from the Star Wars Universe (SWU), what would it be? It could be a mash-up/ugly.

“The Millennium Falcon. Is there another possible answer?”

14. Would you rather be Sith or Jedi?

15. Would you rather be a Rebel or a member of the Imperial Navy? What would your role be?

I’d like to be a Rebel librarian, looking up strategies.

16. If you could be any species from the SWU which would you be?

17. If you could date any species from the SWU which would you pick?

18. If you could date/marry any character from the SWU who would you pick?

19. If you were going to bone just one Star Wars character and you never had to see them again, who would you pick?

22. What color would your lightsaber be, what kind would it be (double-bladed, single blade), would you dual-wield, and what kind of grip would it have?

“As for grip…just a standard straight grip, I guess.”

23. Do you own SW merchandise?

Possibly, but not sure.

24. How much, to date, do you think you’ve spent on SW merchandise?

Mostly the comics, when they were brand new and cheaper and I was getting a work discount. $40.

25. What is your favorite SW possession?

27. Are there items you do not own but covet? What are they?

28. Are there items that are not made but that you wish were made? What are they?

Of course. And George Lucas’ revisionism is unnecessary.

30. Did Boba Fett, in your opinion, ever leave the Sarlacc or did he die there?

One of those mysteries.

31. Are there things about the movies you wish you could change? If so, name three.

Lucas has been doing to much fixing that I haven’t thought much about it. Jaquandor, of course, has been fixing the prequels at length.

32. Which era would you want to live in?

“There doesn’t seem to be huge difference between the eras in the films (and why would there be, they’re only separated by about twenty years), so sometime in there would be fine. Preferably on one of the outer worlds where the Empire hasn’t quite got ‘round to totally taking over yet.”

33. What SW games have you played?

Possibly one years and years ago.

34. Do you play/own Star Wars Miniatures?

I can’t visualize any save Princess Leia, and the gold bikini is a classic.

37. Have you ever dressed up as a SW character? Who/When/Why?

38. Do you ever have SW sex fantasies? If so, have you ever acted them out?

39. Do you Ship any SW characters who aren’t together? Who/why?

40. Have you ever written SW fan fiction? Can we read it?

41. Have you been to a Celebration or plan on going to one?

42. Have you ever been to Star Wars Weekends at Walt Disney World?

43. Do you wish they had Star Wars Weekends at Disneyland?

45. What initially brought you to the SW fandom?

I saw the original when I was 24 or 25, during a period I was also reading the comic books. I just enjoyed that first picture, thought it was entertaining.

46. Do you consider yourself a SW Fanboy or Fangirl?

47 Have you seen Fanboys? Favorite character and/or quote?

“Obviously this quiz originated before the Disney sale and the announcement of Episodes VII, VIII, and IX. I’m fine with it.” I’ll probably see #7, and decide from there.

49. If they ever made 7, 8, and 9, do you think it should continue the Skywalker Legacy or use entirely new characters? Or something different?

“As long as there are Star Wars stories being filmed under that include “Episode [number]” in the title, they should be about some generation of Skywalkers. Other tie-in movies? Fine. But I want Skywalkers. They’re totally central.”