As usual, I’m missing my father, glad to be Lydia’s father, and wishing that my father and my daughter had met.

I really liked traveling with Lydia, just the two of us. Save for a couple 1.5-hour bus trips from Albany to Oneonta and back, we don’t travel alone together beyond the routes of the CDTA regional bus system. She traveled well. She was momentarily peeved when I had to put her tray table in its upright and locked position until she realized that EVERYBODY had to do that.

Lydia made me a drawing for Father’s Day. Drawing seems to be the gift for every occasion of late: birthdays, Christmas, anniversaries.

In 1909, Sonora Smart Dodd was listening to a Mother’s Day sermon when she wondered why people didn’t celebrate Father’s Day. After her mom’s death, Sonora’s dad – William Jackson Smart, a Civil-War veteran – had raised all of his children alone.

To show her gratitude, Sonora worked to have Father’s Day celebrated during June – the month of William’s birth. She was successful, and the event took place on the 19th of June, 1910. Fourteen years later, Father’s Day had become so important in America that President Coolidge recommended it should be a national holiday.

It was President Lyndon Johnson, though, who designated the date as the third Sunday of June and President Nixon who formally instituted Father’s Day as a time of national observance.

I believe it was Gordon who noted seven things about him that you may not have known. Then Scott tagged me, with these instructions:
“Players start with 8 random facts about themselves. Those who are tagged should post these rules and their 8 random facts. Players should tag 8 other people and notify them that they have been tagged.” 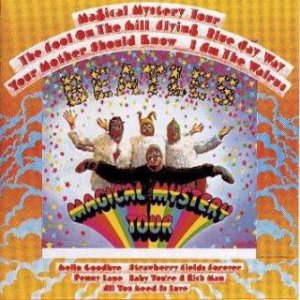 1. When I first picked up the album Magical Mystery Tour in the store back in 1967 or early 1968, I simply could not read the words “Beatles” in the yellow stars. I knew it WAS a Beatles album from the song list, but it was a full five minutes before I sussed out the group name. (Confidential to Fred Hembeck: November 27, 1967.)

2. My favorite mixed drink is 45% orange juice, 45% cranberry juice, 10% ginger ale. The cranberry cuts the OJ’s acidity, the OJ cuts the cranberry’s tartness, and the ginger ale is just to give it that faux alcohol sensation. I’ve ordered the mixed juices sans ginger ale in restaurants, and while some places seem to take it in stride, others act as though I want them to cross a desert barefoot to get liquids from a cactus or something.

3. My favorite cereal combination is spoon-size shredded wheat and Cheerios. But I won’t buy either of them unless they’re on sale. So when they ARE on sale, I might buy four or six boxes. I might even use coupons, which I seldom use otherwise.

4. In the spring or summer of 1976, I was in a production of Godspell in my college town of New Paltz. My solo was, initially, “We Beseech Thee”, a song I could sing and I liked, but got changed to “All Good Gifts”, which I was never fond of.

5. When I lived in New York City in the summer of 1977, I lived in Jackson Heights, Queens, but I worked in Manhattan. I took the #7 train, then the E or the F train. I was a telephone solicitor five nights a week from 6 pm until midnight. Who was I calling at 11:30 at night? People on the West Coast, of course. The folks I called were people who had once expressed interest in the product – people with lapsed subscription to TV Guide, people who owned the Encyclopedia Americana who might want the Annual. As a result, I’m very polite to phone solicitors; I say “no, thank you,” right before I hang up on them.

6. During that summer of 1977 (which, not so incidentally was the Summer of Sam), I met this young woman from the Unification church (yes, that’s the Moonies) and would have dinner with her group once a week for a couple months at their place in the Bronx. I was invited to go to their complex upstate; I always declined.

8. I once successfully performed the Heimlich maneuver on a 70-plus-year-old woman in May 1995. This was at my church of the time. I had been in a pretty sour mood, actually, because of resolving some old affairs of the heart stuff. This woman, who I did not know, was off to the side, looking as though she was turning blue. Then someone opined that perhaps she might have eaten something. I recalled my training from high school, never utilized. Some piece of meat flew at least 15 feet. The pastor, always one to come up with a smart-aleck remark, said to me, “If you see ME choking, just let me die.” (Confidential to MRR – yes, he’s the one.)

I’ve always been loath to tag – though I don’t mind being tagged – so, only if you want to:
The Scribe at Peace X Peace
Uthaclena at the Hydrogen Jukebox
and the Weird Monday person, Kelly Brown.
***
Oh, here’s another thing about me: I recorded two programs last night – and neither was the last episode of the sopranos. One was The Tonys on CBS, which we like to watch because we’re generally unfamiliar with the productions, ironically, the reason nobody ELSE watches them. The other is Bruce Springsteen and the Seeger Sessions band live in Dublin on PBS. We’ve actually watched neither, but hope to before the fall.
ROG