Oscar night has been for me a must-watch for decades. This year, I’m actually in better shape seeing movies than I was last year at this time.

The obvious questions about which I’d love for you to opine:
Who will win?
Who do you WANT to win?
* indicates films I’ve actually seen

BEST ACTOR:
*Richard Jenkins-THE VISITOR
*Frank Langella-FROST/NIXON
*Sean Penn-MILK
Brad Pitt-THE CURIOUS CASE OF BENJAMIN BUTTON
Mickey Rourke-THE WRESTLER
Will win: Rourke. Oscar loves the comeback. Langella, though, would not be a shock.
Want to win: Jenkins, who nobody knows until they see him. “Oh, THAT guy.”

BEST SUPPORTING ACTOR:
*Josh Brolin-MILK
Robert Downey Jr.-TROPIC THUNDER
*Philip Seymour Hoffman-DOUBT
*Heath Ledger-THE DARK KNIGHT
Michael Shannon-REVOLUTIONARY ROAD
Will win: Ledger. The fact that DK was not picked for best picture practically assures it.
Want to win: Downey, because he had a good year with Iron Man, which I saw and enjoyed. But I’m not begrudging the late Ledger.

BEST ACTRESS:
Anne Hathaway-RACHEL GETTING MARRIED
Angelina Jolie-CHANGELING
Melissa Leo-FROZEN RIVER
*Meryl Streep-DOUBT
Kate Winslet-THE READER
Will win: I can make the case for Hathaway, who’s expanded from the Princess Diaries/Devil Wears Prada mode; yeah, she did in Brokeback Mountain, too, but didn’t get the recognition. Or for Streep, who’s won twice, but not in a quarter century. Guess I’ll pick Winslet, because she’s never won, though oft nominated, and she had a good year with Revolutionary Road and this. (Although, when I went to see Slumdog, my wife was asking about Revolutionary Road and the couple in front of us told us it was three hours of whining, a complaint I’d heard before.)
Want to win: Leo, who was on one of my favorite TV shows, Homicide, and who lives in upstate New York. Yes, I can be parochial.

BEST SUPPORTING ACTRESS:
*Amy Adams- DOUBT
*Penélope Cruz-VICKY CRISTINA BARCELONA
*Viola Davis-DOUBT
Taraji P. Henson-THE CURIOUS CASE OF BENJAMIN BUTTON
Marisa Tomei-THE WRESTLER
Will win: Henson. The movie has the most nominations and it needs a win. Also, Oscar wants to honor a black or foreign performer (England and Australia evidently are not foreign enough) – could be Cruz, but Davis’ part was too short (Judi Densch in Shakespeare in Love notwithstanding). Finally, Oscar always wants to pluck someone out of obscurity, and if you look at supporting actress winners over the years, it’s littered with “Who’s she?”
Want to win: Cruz, who lit up the screen.

Best Animated Feature
BOLT
KUNG FU PANDA
*WALL-E
Oh, please. I’m just annoyed that something like Waltzing with Bashir wasn’t also nominated to give the most deserving Wall-E some semblance of a challenge.

Best Director
THE CURIOUS CASE OF BENJAMIN BUTTON
*FROST/NIXON
*MILK
THE READER
*SLUMDOG MILLIONAIRE
Will win: Slumdog Millionaire
“Oh, Danny Boyle,
The Oscar trophy’s call-all-lin'”
Want to win: Gus van Sant’s Milk, though Ron Howard’s Frost/Nixon would be OK, too.
I’m SO relieved the directing and best picture nominees lined up so I don’t have to hear about the best picture nominee sans director, “What, did it direct itself?” again.

Adapted Screenplay:
THE CURIOUS CASE OF BENJAMIN BUTTON
*DOUBT
*FROST/NIXON
THE READER
*SLUMDOG MILLIONAIRE
Will win: Slumdog Millionaire. I had a faint inkling for an upset, but it has passed.
Want to win: Frost/Nixon

Original Screenplay:
FROZEN RIVER
HAPPY-GO-LUCKY
IN BRUGES
*MILK
*WALL-E
Will win: Milk. The only best picture nominee on the list, which will get shut out of other major categories.
Want to win: Frozen River, which my wife DID see, but I didn’t, when I got sick on the back end of a botched separated movie date. 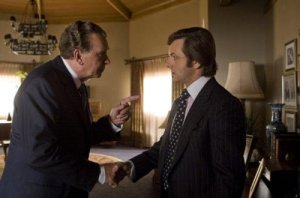 Because Richard Nixon was the first President for whom I could have voted for – I didn’t – he has long held a special role in my life and my heart. In the day, it was nothing but anger and revulsion; since then, a more nuanced view. At the time, I thought he was destined to be one of the United States’ worst Presidents; in hindsight, merely one that was fatally flawed.

I saw the Oliver Stone-directed movie Nixon (1995), starring Anthony Hopkins and Joan Allen, when it came out, with its warts and all. I enjoyed it well enough, but its quirky narrative style sometimes got in the way.

So last weekend, the wife and I did one of those “split date” things, with me going to the movies on Saturday and her on Sunday to see the more “conventional” filmmaker Ron Howard’s take on an event that took place after the Nixon Presidency, but which was necessarily all about it, Frost/Nixon.

I’ve found that a great number of people no longer remember David Frost, the “British satirist, writer, journalist and television presenter” who interviewed Nixon in 1977. There’s no current comparison who fully encapsulates it, but it’d be like Jay Leno or Larry King doing a hard-hitting interview of George W. Bush.

Most people who disliked Nixon wanted the interviews to be the mea culpa that Nixon never gave after the resignation, but felt that Frost was a lightweight who was was not up to the task. So it was that each participant had something to prove. Frost/Nixon turns out to be an intriguing film, not just the one-on-one, but the whole backstory leading up to the main event, including the need to secure the $600,000 for the interview, the slams of “checkbook journalism” and the desire to get the interview right.

Frost/Nixon is another play that was made into a movie. But unlike Doubt, it didn’t feel as stagy. One would not expect a historically-based movie about two guys talking to be so tense and yet so revealing of both men. Frank Langella, who is rightly nominated for best actor, “does” Nixon without being a caricature. In fact, the most revealing scene has Langella saying nothing. But look at his eyes! They spoke volumes about what was going on in Nixon’s mind. But the movie would collapse if Michael Sheen as Frost was not up to the task. Sheen, who played Tony Blair in 2006’s The Queen, ends up being as worthy an acting partner for Langella as Frost was an adversary for Nixon.

Some critics inevitably kvetched about historic inaccuracies here and there, which almost always happens. I wondered if the last scene – which is REALLY funny – actually happened; it matters not. I was entertaned and I learned a few things.

Frost, who has interviewed the last seven U.S. Presidents and six British Prime Ministers (excluding, so far, the current ones) now works for Al Jazeera English.