I have long been fascinated with all things related to the calendar. Last February, I received three biweekly paychecks, a phenomenon that’s possible only once in about every 56 years.

This year, we’re having two Friday the 13ths in a row, in February and March. This only happen when February 1 is on a Sunday AND February is NOT a leap year, or about thrice every 28 years. (I say “about” because the non-leap year century marks such as 1900 and 2100 throw off the calculation.)

This means my birthday will be on a Saturday, same as my birth day. (Hey, hearts players, game at my house on that day.) This would be more special had I not made the decision years ago to take off my birthday from work anyway. So this year, I’ll take off the day before my birthday and get a massage. 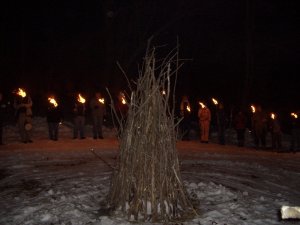 In fact, I was leading the conversation in the Adult Education class this past Sunday, using that NAACP timeline as a starting point. Conversations about whether to show the D.W. Griffith movie “Birth of a Nation” or how public education has become resegregated in the decades after Brown vs. Board of Education ensued.

All in all, I’m feeling pretty lucky today, all things considered.
I’m Lucky by Joan Armatrading, from the Walk Under Ladders album

30. Sixty Years On- Elton John
Just great use of strings. Too bad Elton’s vocal’s mixed too low, but the instrumentation is a fair representation of the recording.
Feeling: old.
or HERE.
ROG 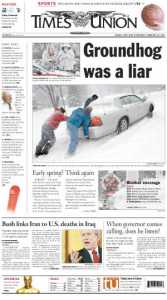 FEBRUARY 14, 2007, 9:15 a.m. – I had riding the stationary bike at the Y, rather than playing racquetball, because none of my cohorts bothered to show up. was it because we were under a winter storm warning, that virtually every school in the area, including the always-reluctant-to-close Albany School District, were closed? It wasn’t THAT bad out. The #27 Corporate Woods bus shows up, only about 15 minutes late – I was about to give up on it – and the bus driver transported his two passengers to the office.
9:30 a.m. – I was only one of 5 people present, out of 13 scheduled, and 15 total. My office has a great view of I-90, which looks perfectly clear…where did it go? The highway alternated from being fairly visible to being impossible to see from the snow and wind.
9:45 a.m. – I call my wife to let her know that the there’s rumors that CDTA will be pulling their businesses. That can’t be right. Their website is touting its availability in the midst of the storm:
When the rest of the world is standing still, CDTA is…Your Reason To Ride!

When severe weather hits, keep your car off the slippery streets and ride with us.

11:45 a.m. – We’re told that the main office for the Research Foundation downtown would be closing downtown at 1:30, and that we could do the same, if we chose. I choose.

12:30 p.m.- Call one of my sister. She works for a drug store chain, and as it turned out, I had a related reference question, and therefore a legit excuse to call her in California. I’m lucky.

2:09 p.m. – The bus was late. I’M LUCKY. The normal pattern is that it comes by our building, makes a turn at a circle down the road, and then it comes back and the passengers from my building get on. For some reason, though, the other passengers and I went out to meet the bus. Since the circle wasn’t plowed , the bus didn’t turn around. I would have missed it had I waited. I’M LUCKY, because I’m not sure another bus came out to Corporate Woods that day; they were pulling their buses off the road, except for the core routes, because they kept getting stuck.

2:25 p.m. – I’m waiting at the corner of Washington and L;ark for the #10 bus to come home. There was a supervisor vehicle at the stop. I asked him when the next #10 was coming. He said I had to go down another block (to Central and Henry Johnson) to catch it. I’M LUCKY I asked.

2:55 p.m. – The masses huddled at the kiosk were trying to get more info from CDTA from their cell phones. Only one could not reach CDTA by phone; I had tried twice when I was still in the office. I’M LUCKY that I lived near two of the core routes. Took the #12 Washington Avenue bus, which got stuck for about five minutes, trying to make a right turn onto Washington Avenue. Some doofy guy was laying on his horn, AS THOUGHT IT WOULD MAKE A DIFFERENCE. (Doofy, BTW, is a portmanteau from goofy and doofus.) I’M LUCKY we did finally get around the corner.
This bus meant a three-block walk. It’s technically illegal to walk in the street, and I scowl when people do it when we’ve had an inch or two of snow, but with a foot of the powdery stuff impossible to walk through, I was road-bound as well.
3:25 p.m.- Trudge home, drink hot chocolate. Carol and I watch an old Gilmore Girls.
4:50 p.m. – I’M LUCKY that I waited. My neighbor Dino plowed a path on our sidewalk and up to the steps. I still had plenty of shoveling to do, but it was made infinitely easier.

7 a.m. When i read on the CDTA website that only the core routes are guaranteed to operate, I decided to stay home.
8:30 a.m. Start a half hour outside, half hour inside regimen to dig out the car.
9:30 a.m. I’M LUCKY that my neighbors helped me with the digging.
11 a.m. Read the Times Union online: “Capital District Transportation Authority buses clogged the intersection of Central Avenue and Henry Johnson Boulevard, making it impossible for cars to get by.” That’s my route to work. I’M LUCKY I stayed home.

I’m lucky
I’m lucky
I don’t need a bracelet
No salt
For my shoulder
I don’t own a rabbit
No clover
No heather
No wonder
I’m lucky
***
Picture from Thursday’s newspaper. Check here for a Nightline segment with the Albany mayor.