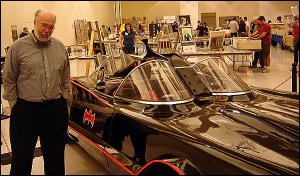 Roger from Albany wonders: So how are you feeling now after your accident?

The problem is that I’m healing, feeling better, so that inevitably I overdo. Friday, for instance, I was carrying a bag in my right arm that I guess was too heavy, for my left side, where I broke my rib four weeks ago tomorrow, ended up in pain not unlike what I experienced two weeks ago. Still, I am healing, and I actually lifted my left arm almost straight up. I can’t run, but i can trot, which I couldn’t do the week before . The only thing that gives me really tremendous pain is sneezing. (Yes, i do talk to myself; ask my wife.) Oh and the picture was stolen from ADD, but then again, he stole my whole post, just as he promised.

Anthony asks: If it is not too late, I would like to ask a question, of a mildly philosophical and yet somewhat personal nature.

What do you think is the most critical quality or characteristic for a politician (make that statesman) to have in order to effectively govern, and why do think this?

First off, you assume that someone CAN effectively govern. Let’s posit that that is possible.

Second, you assume it’s not too late. After listening to a half dozen podcasts by James Howard Kunstler (curse you, ADD), I wonder. (On he other hand, ADD did have his own quasi-theological treatise.

Third, let me touch on a trait that are NOT necessary: be the kind of person with whom I can have a beer. Besides the fact that I don’t much like beer, I’ve thought it was a bizarre criterion for picking leaders.

I suppose the chief characteristic I’m looking for in a politician is integrity. I think that one can lead more effectively that way. And it’s not just beyond reproach, like Caesar’s wife. It’s a value system that makes one feel that the politician/statesperson wasn’t bending to which ever way the political winds are blowing. I’m not saying that John Kerry was doing that in 2004, but sometimes it FELT like that.

Of course, one has to have real Christian values, such as looking out for the greater good, rather than just for his or her cronies. One does not profess to be a Christian, or indeed, a member of any faith, to achieve this; conversely, public piety does not Christian values prove (see Bush, George W.)

I read about this town along the Mississippi River that was flooded in 1993. The town decided to move the entire town to higher ground. So while neighboring towns are inundated again in 2008, this small town is literally high and dry. That took leadership, and an integrity that this was taking place to help everyone.

When I was in college in New Paltz, NY in 1974, a Congressional seat opened up. The Republican incumbent, Howard Robison of Tioga County, decided not to run again in this massive district that ran through at least five counties and looked like a giant curved hot dog, running from Ithaca (Tompkins County) through my hometown of Binghamton (Broome County) all the way to Woodstock and New Paltz (Ulster County). Four Democrats and five Republicans vied for the seat.

I was a member of the New Paltz Democratic Club and we heard from three of the Dem candidates; the fourth the Town of Union (Broome County) supervisor Knopp (or something like that) didn’t bother, because the core of the population base skewed east and we were on the western fringe. The three who came were a young lawyer from Binghamton, who at least one member ended up supporting; Bill Schecter (sp?) a Woodstock lawyer and perfectly acceptable choice; and Matt McHugh, the district attorney from Tompkins County. As the anti-establishment type that I was, I felt I would be least likely to support McHugh, whose job title epitomized “The Man”. But I wish I could tell you now what quiet elegance the man had where he expressed his viewpoint and I realized that, despite my initial misgivings, it as clear to me that he was the best man for the job. He oozed character. Maybe three or four others (John Vett – who would later become mayor of New Paltz; Tom Nyquist – who would also eventually become mayor of New Paltz; Tom’s wife Corinne) also supported McHugh; everyone else went to the local favorite, Schecter.

I never worked so hard on behalf of another person in my life until I cleaned out my mother’s shed last fall. I went door to door carrying petitions and got at least 125 signatures. I attended a number of “meet the candidate” house events. One of Matt’s great gifts was not only the ability to remember people’s names, but specific details about them. “Hello, Mary, how’s your husband Bob’s lumbago?”

Matt even gave me a ride from New Paltz to Binghamton so I could visit friends, and on the two-and-a-half hour drive debated the issues of the day. I didn’t agree with all of his positions. I specifically recall his position against abortion, based on his Roman Catholic upbringing which I didn’t share, and yet we found ways to agree to disagree while embracing our common ground.

The results of the primary was that Matt McHugh won the primary. He lost the part of Ulster County in the district, but I was pleased to note that HE WON NEW PALTZ!

For the general election, one of my professors, Glenn McNitt, who had been backing Schecter, helped organize polling phone banks, and I made a lot of calls. McHugh would be running against Al Libous, the mayor of Binghamton, whose politics I HATED. Of course, McHugh won the general election and served until the end of 1992, when he declined to run for reelection.

He is currently on the board of http://www.abanet.org/rol/europe_and_eurasia/board_europe_eurasia.html the America Bar association Rule of Law Initiative.

Anthony, I know I’ve fallen far afield of your question. Anyway, I think people sense authentic or inauthentic. Well, some of the time.

Oh, and thanks for your defense of me by that “opiate of the masses” guy. Peculiar, the post itself was primarily a thanks to my church choir director, whose last service is today; I never expected that sort of response and feel rather ill-equipped to go one-on-one with that type.