There was a one-room schoolhouse in a tiny hamlet called Doraville, NY. It was so small that, growing up in Binghamton, perhaps 26 miles (42 km) away, I had never heard of it until considerably later. But it holds a special place in the hearts of my in-laws.

Two of my mother-in-law’s older siblings actually attended the school before it closed down during a school consolidation c. 1940. But then a kitchen was added on, and the building was used for years as community center for meetings, suppers and the like. As it was a very short walk from the former school to my mother-in-law’s parents’ house, it became the location for the Olin Thanksgiving for many years, into the 1970s.

At some point, the powers that be decided to tear it down so that some utility lines could be built, or some such. However, members of the community objected. They raised the requisite money to move the building from its original location to a spot in Harpursville, some 3.5 miles (5.6 km) away.

It wasn’t just money that was needed; it was manual labor to cut the building in half, horizontally near the roof line, schlep it to the new location then put it back together. It’s likely that the plans wouldn’t have succeeded at all had the state not coincidentally built a new bridge; the old bridge might not have borne the weight. (The photos pictured tell the story of the move.) 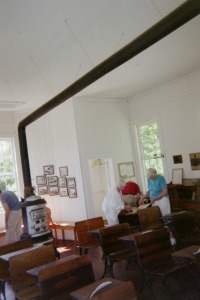 Once moved, there was an effort to try to replicate the school as it once was. Under the leadership of my wife’s uncle Don Olin, this was accomplished.

The doorway in this picture led to the kitchen that had been added in the 1940s.

So when the Olins had their family reunion in July 2009, they held it at the Harpursville Veterans of Foreign Wars hall, maybe 1 km (1100 yards or so) away, the family made sure the school was open for their perusal. The pictures here were taken by this blogger at that occasion with a disposable camera.

Unfortunately, Don Olin died last November. The restoration of the Doraville Schoolhouse is a lasting memorial to him. Here’s more about Don. 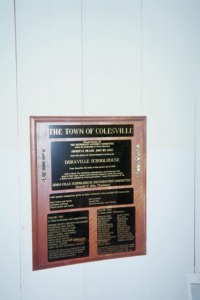 And more on the Doraville Schoolhouse.

No, the outhouse, just behind the school, is no longer in use.

Talked about my family a couple days ago; time to talk about my in-laws.

Actually I may get along better with them than my birth family. and in the main, I see them more often, since they’re located in New York and Pennsylvania rather than North Carolina and California.

Still, I was quite nervous about this scheduled family vacation. It was to be my parents-in-law, two brothers-in-law, their wives and, collectively, three daughters who are 7 and 8, plus Carol, Lydia and me. The plan, as it shook out was that we would all travel to Williamsburg, VA for a week. i thought that much familiarity would surely breed contempt. But it was to celebrate my parents=in-law’s 50th wedding anniversary that was back in March; we’d done something then at their church, but this was actually planned in the fall of 2008.

Separately: Williamsburg in July wasn’t my idea of a good time. I’ve been to Virginia in July with an ex-girlfriend. We went out early in the morning but spent most of the day in air-conditioned comfort.

As it turned out, my wife had too much reading to do and too many papers to write, details of which will be forthcoming.

Then Wednesday, my wife’s sister-in-law (does that make her my sister-in-law as well?), who lives a little over an hour from Albany, had thyroid surgery at an Albany hospital. I actually never saw her; I spoke to, though never saw her husband. But their eight-year-old twins were at the house, and the parents-in-law were up to support their daughter-in-law and help watched the girls. In fact, My wife, her mother, my daughter and the twins all went to Saratoga for a ballet matinee on Thursday.

Now today, is the Olin family reunion, and I’m likely to see the whole tribe that was in Williamsburg, save for the recovering surgery patient.

we don’t usually spend THAT much time together, but it certainly a different relationship when the distances are smaller.
ROG

I was at the Olin family reunion; the Olins are my wife’s mother’s people. They were having their international family event, which they have every lustrum. In 2001, the event was held in my hometown of Binghamton, NY. (The 1996 event was in Fargo, ND; the 2006 in eastern Washington state; 2011, somewhere in Ontario.)

One event was an auction. Many of the items were handmade items, or family treasures; I know Carol got a much-coveted family cookbook with typed or hand-written recipes from various members of the tribe. One lot, though, was for a bunch of mostly classical CDs, maybe 10 or 12 of them. I bid on them, but I was outbid by one of Carol’s cousins in her late teens. Truth is I probably could have put in a pre-emptive bid, but it didn’t seem sporting to overbid a poor high school student. She was really happy to get a dozen classical albums for $20, but what the heck was she going to do with three Paula Abdul CDs? She looked SO pained, so apoplectic, that I bought them from her, for $8 or $10, which she appreciated at a couple levels: she was rid of the albatross AND the albums she REALLY want were even cheaper.

I was recalling this as I finished my annual playing of my entire collection of Paula Abdul albums – Forever Your Girl, Shut Up and Dance (The Dance Remixes), and Spellbound, in anticipation of today, Paula’s 45th birthday. I don’t care what you say: I really like Straight Up. The rest of it: eh, not so much. I didn’t really go through a phase of eighties divas – Paula, Taylor, Madonna, Expose, and Gloria – like some people I know.
***
I’ve had a long-standing affection for the Traveling Wilburys and have Volumes 1 and 3, now out of print. I’m having a hard time thinking about buying the re-release, despite Nik’s appealing review. So, I decided to go to You Tube and watch a couple videos, including the star-laden Wilbury Twist, at lunchtime yesterday. But by 9 p.m. EDT yesterday, the Twist video that I saw only hours earlier was “no longer available due to a copyright claim by Warner Music Group”; it’s part of the new collection. However, what remains on You Tube is the 2007 version, with more George, Bob, Tom, and Jeff. No Wonder Years kids, Milli Vanilli, Cheech Marin, Whoopi Goldberg, or Woody Harrelson, but the John Candy/Eric Idle intro remains.
***
A link to reviews of Paul McCartney’s new album, Memory Almost Full. A couple of them have links to the music and/or videos from the album.

In the fall of 1678, a 14-year old cabin boy named John Olin, who had been forced into service on the British ship Man-O-War, jumped ship in Boston harbor, swam ashore, stealthily traveled inland for about a week, and ended up in the care of the Narragansett Indians for eight years. He became an indentured servant to a Samuel Gorton until 1700, when he became a freeman. John married Susannah Spencer on October 4, 1708, (Was she one of THOSE Spencers from which Lady Di came? Maybe.) and had four known children, Joseph, John, Henry and Eleanor. Or so it is generally believed.

[For the next paragraph, there may be other children, but they’re not relevant to this particular discussion. The numbers indicate generation.]
Joseph Olin (2) begat Joseph Olin or Olden (3), who begat Reuben Olin (4), [this is starting to sound like Matthew, Chapter 1] who begat John Olin (5), who begat Earl Olin (6), who begat Orva Lee Olin (7), [or maybe the first third of 1st Chronicles] who begat George Omar Olin (8). George married Leona G. Ruland, and they had 8 children (all of whom are still alive, BTW), the sixth of whom was Ann Joyce (9). Joyce married Richard Powell and had four children, the second of whom is Carol Ann (10). Carol married Roger Green (hey, that’s me!) and had a daughter Lydia (11).

So, on Lydia’s maternal grandmother’s side, we can trace Lydia’s heritage 10 generations back. I know this in large part because Carol’s uncle, and Joyce’s eldest sibling, Warren, has written not one, but two volumes of 300 Years of Joseph Olin and His Descendents, edited by Joyce.

I’ve found the first volume of Warren’s book listed in the Mormon library. The Mormons are really into genealogy, incidentally, because of their belief in one’s status in the afterlife. (The link to which I’ve misplaced.)

The branches of the Olin family in New York/Pennsylvania (Binghamton), Ohio (Ashtabula), Ontario, and Washington state have held reunions for decades. They’ve also decided to have international reunions once every five years, in Fargo, ND (all right, I hear all those Frances McDormand imitations!), 1996; Binghamton, 2001; and somewhere in Washington state, 2006. The annual Binghamton reunion is this weekend.

On my maternal grandmother’s side, I was able to go back only five generations, to the early 1800s. Unfortunately, my information was lost on a computer that was replaced last year. Fortunately, a family Bible is still around and a cousin of mine has done some work in this area.

Prior to Roots, many black people avoided seeking out their lineage, for fear that they would run into their slave history, but Alex Haley’s portrayals (and the powerful miniseries that followed) changed this dynamic tremendously expanding what was possible for people of all races and ethnicities.

For more on the roots of the Olins, go here.