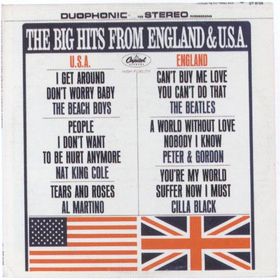 One of the very first albums I ever bought from the Capitol Record Club -11 albums for only one cent! (But read the fine print) was BIG HITS FROM ENGLAND AND USA: one side had two songs each from BEATLES, BEACH BOYS, and PETER & GORDON, the other side, 2 songs by NAT KING COLE and CILLA BLACK, plus “Tears and Roses” by AL MARTINO. I probably still have it upstairs in the attic.

The intriguing thing I discovered as I actually looked on the record’s label was that Lennon-McCartney were listed as composers not only of the Beatles’ songs, Can’t Buy Me Love and You Can’t Do That, but also of the songs of Peter & Gordon, A World Without Love and Nobody I Know. It took me a while to catch up on the Beatles’ trivia that Peter, the one with the glasses, was the brother of Paul’s girlfriend Jane Asher. Peter & Gordon recorded a number of Lennon/McCartney (really Macca) tunes such as I Don’t Want To See You Again and Women, attributed to Bernard Webb to see if the songs were moving because of the Beatles’ connection; based on its chart action, maybe they were.

Peter later became a prolific record producer for James Taylor and Linda Ronstadt, among others. 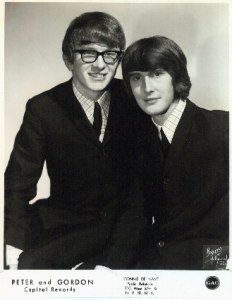 But what of Gordon Waller after the 1968 breakup? According to Gordon’s website, he also stayed busy in the music business, with an extensive, if not commercially successful discography.

He also had opportunities to sing with his old mate from time to time. Gordon Waller died of cardiac arrest on July 17 at the age of 64. Peter writes:

Gordon played such a significant role in my life that losing him is hard to comprehend – let alone to tolerate.

He was my best friend at school almost half a century ago. He was not only my musical partner but played a key role in my conversion from only a snooty jazz fan to a true rock and roll believer as well. Without Gordon I would never have begun my career in the music business in the first place. Our professional years together in the sixties constitute a major part of my life and I have always treasured them.

We remained good friends (unusual for a duo!) even while we were pursuing entirely separate professional paths and I was so delighted that after a hiatus of almost forty years we ended up singing and performing together again more recently for the sheer exhilarating fun of it. We had a terrific time doing so.

Gordon remains one of my very favourite singers of all time and I am still so proud of the work that we did together. I am just a harmony guy and Gordon was the heart and soul of our duo.

I shall miss him in so many different ways. The idea that I shall never get to sing those songs with him again, that I shall never again be able to get annoyed when he interrupts me on stage or to laugh at his unpredictable sense of humour or even to admire his newest model train or his latest gardening effort is an unthinkable change in my life with which I have not even begun to come to terms.

I’d read on one of the sites that the duo was originally billed as Gordon & Peter. It’s tougher when you’re after the ampersand.

***
There was this old Shake ‘N Bake commercial – do they still make that stuff?– and this girl with a STRONG Southern accent says, “And I Haiped!” Which is supposed to be “helped”. Brian Ibbott’s recent Kinks Koverville, er Coverville was a topic I suggested in honor of Ray Davies’ 65th birthday last month. I also pointed out the Tom Jones version of Sunny afternoon, which he played to, so far, positive reaction, I’m surprised to note. ROG