X-Men is a very popular comic book published by Marvel Comics. Actually, the idea of X-Men now means a series of comic book titles with an interlocking directory of characters. It’s so popular that it has help create three movies* with name stars such as Patrick Stewart (Professor Xavier) and Halle Berry (Storm) [pictured above] and Ian McKellen (Magneto) [pictured below]. These are shots from the premiere of the first film. 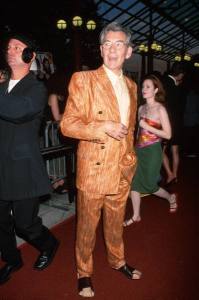 If you look at The Marvel Encyclopedia, updated and expanded foe 2009, which I just happened to take out of the library last week, you’ll find no fewer than 110 references to X-Men in the index; that does not count the seven pages, in the 400-page book, describing the X-Men directly. 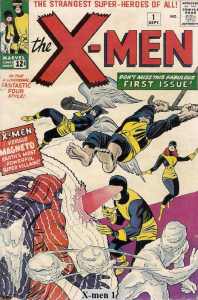 But it’s not its successful nature per se that interests me. Rather, it’s…well, let me explain.

The X-Men were introduced to the world in 1963, the same year as the supergroup known as the Avengers. The premise of the creation of Stan Lee and Jack Kirby was that the characters had certain extraordinary (X-tra ordinary) powers at birth, though they weren’t always manifested immediately. They were mutants, outcasts from society. Yet the group, founded by Charles XAVIER, a/k/a Professor X, was sworn to protect those who feared and hated them, trying to bring peaceful coexistence between “ordinary” humans and mutants.

However, the book, by the same creative team that had created the Fantastic Four, the Hulk and many, many others, was a bit of a bust. Definitely second-tier in the pantheon of comic book characters. Perhaps the theme of minorities persecuted by a majority was a little bit too “on the nose” for comic book fans of the time.

In fact, for about five years the book was essentially canceled, though reprints were released as X-Men 67-93.

Then a new group was developed in 1975 that was more international in scope, and they didn’t all have those boring yellow and blue jump suits. Others can talk about the particulars of the great success of the revised entity. I want to tell you that, as a comic book fan, I was shocked by both how well the re-envisioning worked and how well it caught on with the public.

Think of the movie Rocky. Better still, think of singer Susan Boyle, from which nothing was expected, yet the judges were gobsmacked by her voice. If that weren’t enough, her debut album sold 700,000 units in the first week in the United States alone and another 500,000 the following week. Such was the success of the X-Men.

So much so that when I worked at a comic book store called FantaCo in the 1980s, and we decided to to a magazine about a comic book group, naturally we picked X-Men. I really wanted to edited it, not just because of my affection for the then-current incarnation, but because I loved the rags-to-riches nature of the title. I write about this at length here, with a little bit of follow-up here.

But as Nik from SpatulaForum writes: “Unfortunately, the ‘X-Men brand’ has been so utterly diluted in the years since by endless spin-offs, impossibly complicated continuity and everything from movies to action figures to beach towels that it’s hard to forget how simple and revolutionary they once seemed.” It’s interesting that the teen artists of Kids of Survival chose to use the X-Men, a run of 1968 episodes of the comic book by Stan Lee and Jack Kirby, totally unaltered beyond being placed as the canvas, as their choice, rather than the more up-to-date versions, in their artistic expression. 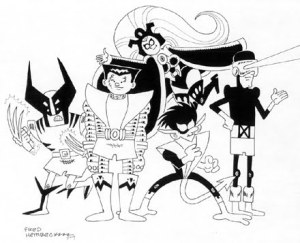 Here is a picture of my good friend Fred Hembeck’s rendition of the X-Men. You can find more of his work here.

*Yes, I know there’s also a Wolverine film. Len Wein, who helped created Wolverine in Hulk #181, talks about the character here and here.

Uthaclena, who is one of the few people reading this blog I know personally:

Okay, it’s Sunday, and the header of your blog refers to “pondering… God.”

Do you believe in “God” as a supernatural Personality actively creating, shaping, judging, intervening, with whom one can have a “relationship?” And, as a follow-up question, do you believe in personal survival after bodily death? Some awareness that will recognize I am/was “Roger?”

OK, U., interesting questions. And I waited until Sunday to answer them.

I don’t think God made the world then went away. I believe that God is an active entity. I believe in the power of prayer. But I don’t believe that prayer is like some sort of cosmic Santa Claus where you get to pray for a pony and ZING!, a pony arrives. Intercessionary prayer I believe in. And sometimes the answer is no. Three examples immediately come to mind.

There was a woman I knew named Rus who had a rare, incurable disease. About 20 years ago, while she was dying in a Boston hospital, a bunch of her friends, including me, were in the chapel of Trinity United Methodist Church in Albany, praying for Rus. And she was cured. There is no other logical explanation for it.

People were praying for my father in 2000 and my brother-in-law John in 2002, too, but they both died. And in each case, someone who was praying probably the hardest for them got pretty damn angry with God.

God may talk to people through earthly tools, such as movies. I found this website that discusses the theological ramification of movies. Theological ramifications of “Natural Born Killers”? The site also has a thematic directory where topics from alienation to trust are referenced to specific movies.

I think that often God sends a sign. I am reminded of the joke here (Dumb Faith) that suggests that sometimes the message is given but we are just not hearing it.

As for the second question, I believe in an afterlife. Whether it’ll contain my Rogerness, I simply don’t know. People often talk about the deceased watching over them from heaven; I don’t know if it’s true or not, though I suspect it’s true for them, and that may be enough.
***
Meanwhile someone suggested that I become “friends” with Stan Lee on his Facebook page. So I did, and he accepted on Friday, as he did with Laurence Fishburne and doubtless thousands of others. Probably not worth mentioning, except that it’s Stan Lee’s 86th birthday today.

The San Diego Comic Convention starts today, or maybe started yesterday. I’m not going, but I have gone in the past, on behalf of the retailer/publisher FantaCo. For the first of two times I attended, the details had left me. However, I seem to have written it down in painfully precise detail, only some of which I will share with you now. If the details are wrong, it’s not from a failing memory, as much of this is verbatim from my journal. [The stuff in brackets are asides from a more current perspective.]

Day One (August 11)
The first session I attended was for retailers. It was called “Fear and Loathing in San Diego – the Chain Store is Coming!” It was about how to survive the onslaught of regular bookstores carrying comic books and how to position comic stores to look more like “regular bookstores.” [I was thinking that as long as FantaCo is selling horror comics, this model won’t work for the store.]
After lunch, I went to an exhibit room and talked to a number of distributors. I kept coming back to the Marvel Comics table because Lou Banks, Dale Kanzler, and Ann Eagan were such a fun bunch. [Hey, they were!] I helped the Marvel crew learn how to run a cash register.
I saw Denis Kitchen of Kitchen Sink Enterprises, and I’m afraid I thoroughly gushed when I talked to him about the Chronicles.
I got into a debate with Bob Wayne of DC over the $2.95 Dark Knight format going to $3.50. His point was that if we knew our customers better, we wouldn’t have a problem. [This really ticked me off.] I also complained about the Millennium and crossovers.
Met Mike Friedrich, who is very instrumental in supporting the comic industry’s self-examination. Talked Chronicles with him as well. The Malibu people acted as though they were on the beach – lawn chairs, and laid back. I took an immediate dislike to Ron Turner, who owns Last Gasp, especially when he said, referring to FantaCo, “You still around?” But he bought three cases of The Amazing Herschell Gordon Lewis.

Day Two
Met the people from Comico, CBG (Ann Goetsch, who had just recently married John Koenig). They’re both charming. I also met Chet Krause, who was in San Diego for a car show. He indicated that CBG was a lot bigger project than he thought it would be. He suggested that he probably paid Allen Light too much money for TBG and that CBG was losing money until two years ago. He has nothing but admiration for Don and Maggie, who I unfortunately didn’t meet, and Ann and John. I had just missed meeting Billy Mumy [who I wanted to meet not so much for Lost in Space, but for a couple episodes of The Twilight Zone}.

Day Three
Talked with Cat Yronwode and Dean Mullaney (Eclipse Comics) and Walter Wang (comics distributor) and others. Also met artists like Tina Robbins, Steve Leialoha, Scott Shaw! Hung out a little with Cat’s bored 16-year-old daughter. Saw bits of a couple of movies, and went to a panel on how to break into comics, which was really lame.

Day Four
Caught a snatch of a panel on social relevancy in comics.
Went to Stan Lee’s soapbox. He and Tom DeFalco had an embarrassing interlude when DeFalco reminds Lee that Lee and Jack Kirby DID sign some papers when Marvel was sold in the early 1970s.
Met Steve Webb, who used to write for the Knick News in Albany but who now writes the entertainment insert for a Phoenix newspaper.
There was a panel on gentrifying the ghetto of comics narrated by Gerald Jones. The panel included Joyce Brabner (Real War Stories, Harvey Pekar’s wife), Max Allen Collins (Ms. Tree), Carol Kalish (Marvel), Art Spiegelman, Heidi MacDonald. It occurred to me, and I told Art later, that it is the ghettoization which has allowed these good things in comics to flourish unobserved, and that the good stuff will show through. [I had forgotten this, but I had talked with Art before because FantaCo was buying RAW comics, this oversized comics he was involved with.]
Gerald Jones then moderated “Black and White Comics: The Gray Future.” with Denis Kitchen, Scott McCloud, Gary Groth, David Olbrick, Wendy Pini, Stan Sakai, and Will Eisner, who took exception to the observations (including mine) that the marketplace should have some standards. [I was in an argument with Will Eisner?] Groth and Collins were defending the standards when I left. Other people I saw at the convention: Leonard Rifas, who I met back in ’83 when he was traveling the country – he gave me some African comics; Tom DeFalco; Ward Batty (he and I hit it off instantly).