Cartoon by Dave Walker. Find more cartoons you can freely re-use on your blog at We Blog Cartoons.

Roger Ebert’s Last Words, con’t, commenting on the Esquire article (linked) and photo of him. “Resentment is allowing someone to live rent-free in a room in your head.”

Wayne John tells about the time when a Burger King employee threw a double cheeseburger at him. Lousy aim, too.

Gordon reveals Dymowski and DeNiro – together.

Lady Gaga or Johnny Weir? “Can you tell the difference between the pop princess’ outrageous outfits and the Olympic skating star’s flamboyant costumes without seeing their poker faces?” You Olympics watchers who see figure skating only once every four years have no idea…

And SamuraiFrog has three recent pieces worthy of mention, about Kermit the Frog and friend,Christina Hendricks – no, I’ve never seen Mad Men, either – and a particular Super Bowl ad which also annoyed me. (Should note that, on the latter two pieces, his language is coarser than mine.)

This next section is graphic.

Print & Photographs (P&P) online catalog: Some photos copyright free (and some not).

Rose DesRochers – World Outside my Window: Free Cartoons for Your Blog, two examples of which appear in this very post. 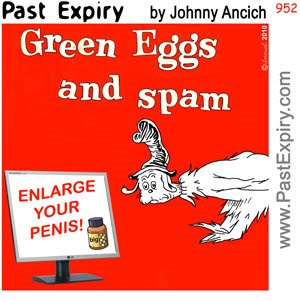 Courtesy of Past Expiry Cartoon

Apparently, Wayne John couldn’t come up with an actual post. I’m so cool with that that I stole the idea.

1. At dinner last week, my wife and I actually had as conversation about The Three Bears. To wit, if all of them went for a walk because the porridge was too hot, then why was the porridge in Mama Bear’s medium-sized bowl too cold, but Baby Bear’s small bowl “just right”? Was it that Mama Bear was on a diet and took only a small portion? Or was the construction of their individual bowls so different that they had such radically different cooling times?

2. Does anyone know which DVD of the Simpsons includes The Raven? My wife needs it for educational purposes. Really.

3. I’m obsessed with branches that have broken off from trees but that have not yet landed on the ground. I worry that a stiff wind will tumble those branches onto someone. Last week, I dislodged one by flinging my backpack over my head.

4. I think if Obama wins, it’ll be because people got their third quarter 401(k) reports and blanched. Mine went down 12% so far this year, with half of that just in the last quarter. So did my wife’s. And my daughter also has a little account that tanked.

5, Conversely, McCain may have lost when he had to explain to some audience member that Obama was not an Arab. BTW, are there ANY Arab-Americans out there supporting McCain? Or any American Muslims, for that matter? If so, they remind me of Log Cabin Republicans.

6. I got out of painting the front porch last week by taking three children to the playground for an hour and a half. I’m not sure I got the best end of the deal.

7. The are people who have signed up for my Twitter feeds and I have no idea how they got there. I don’t tweet enough; I do so hope I don’t disappoint.

8. Every time my daughter’s sick, I’m the one who takes the first day off from work. This means that I only have about 139 sick days left.

9. My wife has an unusual item on her Christmas list: to hire someone to evaluate our home for a possible design redo.

11. I’ve had a book called Play Bridge in Four Hours for years. It’s on my reading list. For 2016.
***
WONDER WOMAN DAY 2008
Every year, writer-editor Andy Mangels stages the Wonder Woman Day event to support women’s charities. Wonder Woman Day includes an auction of donated drawings from a wide assortment of artists. Every year, Wonder Woman Day gets bigger and raises more money, and from the looks of it, the 2008 event will be no exception. This year’s festivities will be held on October 26. If you’d like to see the selection of artwork that’s going up for sale and learn more about Wonder Woman Day, please go here.