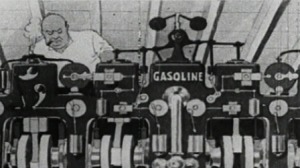 I knew of the early 20th Century American cartoonist Winsor McKay from his Little Nemo strip, which has been collected in books. However, I was less familiar with his other work. “Dream of the Rarebit Fiend was a newspaper comic strip by… McCay which began September 10, 1904. As in McCay’s signature strip, Little Nemo, the strip was made up of bizarre dreams… Rarebit Fiend was printed in the Evening Telegram, a newspaper published by the Herald. For contractual reasons, McCay signed the strip with the pen name ‘Silas’.

“The strip had… a recurring theme: a character would have a nightmare or other bizarre dream, usually after eating a Welsh rarebit (a cheese-on-toast dish). The character would awaken from the dream in the last panel, regretting having eaten the rarebit. The dreams often revealed the darker sides of the dreamers’ psyches… This was in great contrast to the colorful, childlike fantasy dreams in Little Nemo.”