For Martin Luther King, Jr.’s birthday – the holiday is tomorrow, but the actual anniversary of what would have been his 83rd birthday is today – I recommend that you read Letter from a Birmingham Jail, written 16 April 1963 to “My Dear Fellow Clergymen”, published in the Atlantic magazine as The Negro Is Your Brother. Below are just a few excerpts that I believe are particularly applicable to today. For a historical context of the letter, read here. 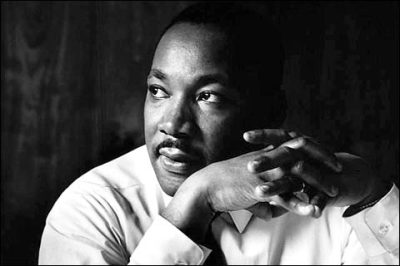 While confined here in the Birmingham city jail, I came across your recent statement calling my present activities “unwise and untimely.”…I think I should indicate why I am here in Birmingham, since you have been influenced by the view which argues against “outsiders coming in.”…

…More basically, I am in Birmingham because injustice is here. Just as the prophets of the eighth century B.C. left their villages and carried their “thus saith the Lord” far beyond the boundaries of their home towns, and just as the Apostle Paul left his village of Tarsus and carried the gospel of Jesus Christ to the far corners of the Greco Roman world, so am I compelled to carry the gospel of freedom beyond my own home town. Like Paul, I must constantly respond to the Macedonian call for aid.
END_OF_DOCUMENT_TOKEN_TO_BE_REPLACED