Unlike in high school, where I was reasonably popular (student government president, drama club, et al), I was rather uninvolved in college; getting married at 19 will do that. I didn’t hang out at the bars and drink; the age of consent was 18 then. I just went to class, and came home, did the grocery shopping and like chores, I would go bowling occasionally with guys I knew, primarily my fellow political science majors.

In the spring of 1974, a bunch of my poli sci acquaintances decided to run as a team with some other folks, who I’ll call the Party and Dance folks. They figured they would capture the beer crowd (the poli sci) and the pot folks (P&D). END_OF_DOCUMENT_TOKEN_TO_BE_REPLACED

New York Erratic must be from New Jersey, she asks so many questions:

Are there any events in your life that you feel make good parables that you want to share one day with your daughter?

I was 51 when she was born, so there is a lot of my life to draw from. Huge parts of it she doesn’t know, significant events, and I’m not sure exactly when/if to tell her. Maybe if she asks. She DOES know about JEOPARDY!

I remember looking at photos of my mother with some guy she went out with before she dated my father, and initially, it was kind of weird, but hey, that was rather natural. When she would talk about it END_OF_DOCUMENT_TOKEN_TO_BE_REPLACED

When I moved from Schenectady to Albany in 1979, it was, in large part, to go to graduate school at the University at Albany (which may have been called SUNY Albany at the time – I forget) in the School of Public Administration.

A few days before the semester began, I went to a very nice party outdoors at a friend’s house, where I was walking in the grass with bare feet. A few days later, one of my toes on my left foot started to hurt, at first just a bit END_OF_DOCUMENT_TOKEN_TO_BE_REPLACED

There’s this website Curious as a Cat, and it asks one to three questions each week. Here are some from 2006 and 2007 I deigned to answer.

1. What is the one experience in your life that has caused the most pain?
Physical pain. Tie between a broken rib and oral surgery. Emotional, surely an affair of the heart.

2. If you had to pick one thing, what would you say is the single thing that can destroy a soul?
Telling so many lies that you start thinking it’s the truth.

3. What one thing always speaks deeply to you, to your spirit, no matter your mood or what else is going on in your life?
Music, always. I hear it all the time. Sometimes it’s something I’ve heard recently, but more often it’s a tune suitable for the moment.

4. What is the least appropriate thing to pray for? END_OF_DOCUMENT_TOKEN_TO_BE_REPLACED

Five years ago today, a couple of these people got married. The bride is named Lucy, a friend of my wife’s from college who I had not met until the day before the ceremony. The groom even my wife didn’t know (and – geez – I can’t remember his name).

Coincidentally, a football player named Ian Johnson got married to his college sweetheart, Chrissy Popadics, on that very same day, after famously proposing to her after his team, Boise State, won the Fiesta Bowl.

Last I knew (February 2012), Ian and Chrissy were still together. But I have no idea about Lucy and her beau. 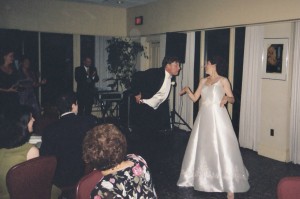 But what I really wanted to talk about are colleges. Lucy’s wedding was at Brown University in Providence, RI. When you travel down the street, one crosses an archway and suddenly one is on the university grounds. I LIKE that, a lot.

It’s my considered opinion that campuses that are close to the city have a greater mutual connection. The College in St.Rose is like that in Albany. UAlbany is a split decision, with the downtown campus integrated, but the much larger uptown campus somewhat harder to get to. Binghamton U, in my hometown, is worse, isolated on the highway, and in Vestal, not even in Binghamton proper.

As you may know, Joe Paterno, coach of the Penn State University football team for 46 years, was fired this week, along with the university president, Graham Spanier. Former Penn State assistant football coach Jerry Sandusky…has been indicted on charges of sexually abusing eight boys over 15 years… Paterno, who, reportedly, was specifically told of one terrible incident, and mentioned it to university authorities without any follow-up, had been revered on the campus. The football program had been a model of a “clean” program. If you have the stomach for it END_OF_DOCUMENT_TOKEN_TO_BE_REPLACED

Lisa from peripheral perceptions, who has very nice toes, writes:
You may have already been asked and answered this one, but…How and why did you get into blogging?

The HOW question I answered, among other places, here, specifically in the fifth paragraph; curse you, Fred Hembeck! The WHY I’m sure I’ve answered, but, to reiterate, it’s mostly because I was composing things to write in my head, I didn’t have a place to put them, and the subsequent noise in my brain got too loud; I blogged to stay (relatively) sane. Now it’s so I can “meet” people like you.
***
Thomas McKinnon, with whom I worked at the comic book store FantaCo, said:
Hey Roger
Tell us the story how you met Tom Skulan, and started working at FantaCo.
I have never heard the story.

Well, those are two very different things. I’m going to go back to the old days of comic book collecting, when you had to get your comics off the spinner racks at the local convenience store. I started collecting comics by early 1972 (Red Wolf #1 was cover dated May 1972, Luke Cage, Hero for Hire June 1972). My friend and I were at college in New Paltz, NY but we had to go to some little hole-in-the wall store on 44/55 in Highland, the next town over, to get our four-color fix.

At some point, maybe as early as 1973, a guy named Peter Maresca started a comic book store called the Crystal Cave, buying from a direct market distributor (Seagate? Bud Plant?) It was right across from a bar called Bacchus. It later moved a couple blocks.

The chronology fails me here, END_OF_DOCUMENT_TOKEN_TO_BE_REPLACED

With colleges now starting before Labor Day, I’m fascinated to note that I didn’t begin my college career until September 12, 1971. As noted, I was attending the State University College at New Paltz only before my high school girlfriend was attending there. And well before I got there, but too late to apply anywhere else, she had dumped me for another guy. 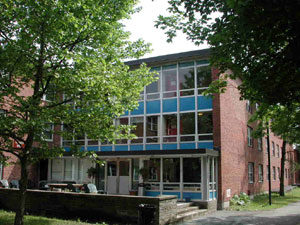 So what to make of the place? I’d been there before, and had had some affection for it. There were three red brick dorms at one part of campus. Scudder Hall was where I was assigned, room B-2. END_OF_DOCUMENT_TOKEN_TO_BE_REPLACED

Here’s a new thing I’m doing on this blog: a periodic recollection of my freshman year, into the beginning of my sophomore year, of college. These were significant events that had medium-to-long-term consequences in my life. If I had the discipline, it’d be an essay, or one way-too-long blogpost.

I won’t be writing them even every month, but in September of this year, then in February, May, June, August and October of next year; maybe a couple other times. I’ll probably link back to the previous episodes, but I’m not going to write the whole thing then chop it up. But the background from the previous segments should inform the subsequent pieces, if I do it write, or right.

I went to college where I did because my girlfriend was already there. But that didn’t exactly work out as I planned.

In the fall of 1970, I was in the second half of my senior year at Binghamton (NY) Central High School, and I would be graduating in January 1971. Meanwhile, my girlfriend, who was six months older than I, was a freshman at the State University of New York at New Paltz, about 150 miles away, in a small town along the Hudson River about halfway between New York City and Albany.

I would visit her at the all-female Bliss Hall END_OF_DOCUMENT_TOKEN_TO_BE_REPLACED

When I was in college, I was co-editor of a thrice-weekly newsletter, inexplicably called the Wind Sun News, sponsored by the Student Government. They instituted this publication in no small measure because the editors of The Oracle, the student newspaper, decided that political issues such American involvement in overthrowing Chile’s Allende in favor of Pinochet was more important to cover than the prosaic issue of college politics.

I had a very good friend then, who I’ll call Lynn, mostly because it was her name. She had been kvetching about turning 20. It was a Wind Sun News night, when a bunch of us would work from 8 or 9 p.m. until around 2 a.m., and occasionally later. Normally, Lynn would be there, but her friend Pam convinced her to go out to dinner with her because she “needed” to talk to Lynn about her relationship with her boyfriend. It was an effective ruse because Pam apparently DID talk to her about the beau.

Lynn came back to the office just before midnight, glum END_OF_DOCUMENT_TOKEN_TO_BE_REPLACED