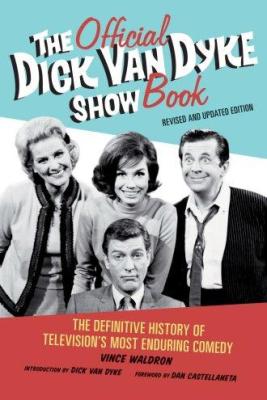 According to Vince Waldron’s book (pictured), which I read this past summer (I recommend it), when asked to play the part of comedy writer Sally Rogers on The Dick van Dyke Show in 1961, longtime actress Rose Marie asked “What’s a Dick van Dyke?” The 35-year-old actor had been a pantomimist, radio DJ, and a local talk show host. He was even the anchor of the CBS Morning Show, but like many before and after him, that program was a failure, even with Walter Cronkite as his news reader.

Whatever real success he had had up to that point was on Broadway in Bye Bye Birdie. Producer Sheldon Leonard caught the show, and signed Van Dyke. Impressively, and fortunately for him, END_OF_DOCUMENT_TOKEN_TO_BE_REPLACED

There is this list of the five best television series of all-time, compiled by ABC News and People Magazine, and conveniently broadcast on ABC in the past couple weeks. Interestingly, all were comedies, none of them were broadcast on ABC, and the latter four would probably be canceled quickly these days because the early ratings were not particularly good. The list included:
I LOVE LUCY (CBS)
SEINFELD (NBC)
MASH (CBS)
ALL IN THE FAMILY (CBS)
CHEERS (NBC)

I read about it on Ken Levine’s blog. He (pictured) mentioned this because he was a writer for two of the shows, MASH and Cheers, which I suppose I’d consider for my list as well. I’d also pick Lucy, if only END_OF_DOCUMENT_TOKEN_TO_BE_REPLACED

The day after Christmas, the Palace Theatre, a once-and-again-classic Albany movie theater from the 1930s with a fascinating past, was showing the 1964 movie Mary Poppins at 3 p.m., preceded by activities for children. We pretty much missed the activities, such as posing with a young woman dressed as Ms. Poppins, because I was still moving slowly from whatever bug was paining me.

My wife decided that we should go up to the balcony, which I thought was an intriguing idea; it’s been a very long time since I’ve seen a film from there. At some point, Ms. Poppins END_OF_DOCUMENT_TOKEN_TO_BE_REPLACED