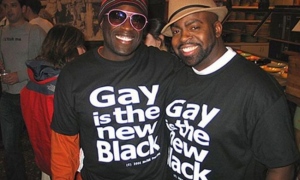 Arthur at AmeriNZ asked a question earlier in the month:

Here’s something that worries me…: Racism. The spokesperson for the leading radical rightwing religious-political anti-gay hate group seemed to go WAY out of his way to praise black Democratic legislators in Illinois for not supporting the freedom to marry. That same hate group, of course, famously said that one way to defeat marriage equality was to deliberately create divisions between the LGBT and Black communities. All too often, LGBT people buy the racist propaganda hook, line and sinker. And, it seems to me, some Blacks are too willing to buy the propaganda of mainly (or exclusively) white anti-gay groups.