Recent news stories of interest to me:

The U.S. appeals court in Boston became the first appeals court to strike down as unconstitutional the federal Defense of Marriage Act. This seemed obvious to this old poli sci major that DOMA violated the equal protection clause of the 14th Amendment.
***
The prosecution of former presidential candidate John Edwards is officially a waste of time and federal resources. Not surprising to me: I had predicted his acquittal. My, I hope the government doesn’t decide to prosecute again after the jury was hung on five of the six charges.
***
President Obama and First Lady Michelle Obama host former President George W. Bush and Former First Lady Laura Bush for the unveiling of their official portraits. It’s true END_OF_DOCUMENT_TOKEN_TO_BE_REPLACED 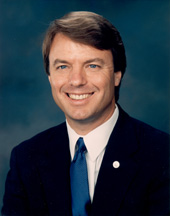 John Edwards (D-NC), the 2004 Vice-Presidential nominee on the John Kerry ticket, is on trial for misappropriation of 2008 Presidential campaign contributions in order to support Rielle Hunter, his former lover and mother of his youngest child. This was going on while Edwards’ wife Elizabeth was was dying of cancer; a sordid affair. Edwards was offered a plea bargain that would have given him months of jail time, though he would have lost his law license; he could get 30 years. I suspect he turned down the deal because he thinks he can win in court. The crux of the matter is whether those payments to Hunter were actually campaign contributions.

Citizens for Responsibility and Ethics in Washington (CREW) Executive Director Melanie Sloan notes “Sen. Edwards’ conduct was despicable and deserves society’s condemnation, but that alone does not provide solid grounds for a criminal case. DOJ’s scattershot approach to prosecuting public officials is incomprehensible and undermines the integrity of the criminal justice system.” END_OF_DOCUMENT_TOKEN_TO_BE_REPLACED