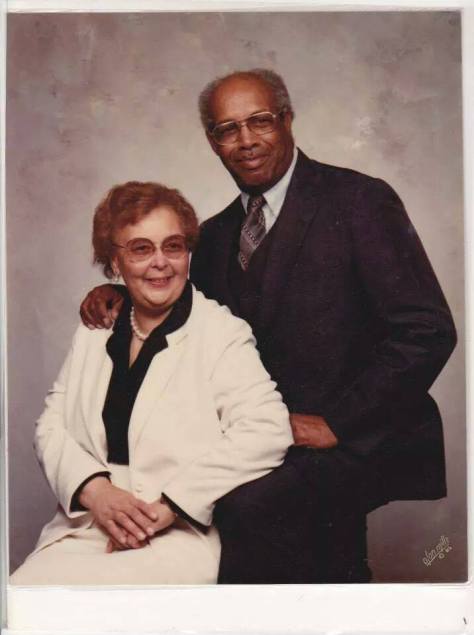 John (who’s about a decade older than I, and went to my church): Sadly the LESLIE GREEN that I knew passed away some years ago. His son Roger Green is a member of the I AM FROM BINGHAMTON NY site. Knew LES & his Wife as the GREEN Family was a major part of our TRINITY AME ZION CHURCH and active in the general African American Community and the General Binghamton NY area… END_OF_DOCUMENT_TOKEN_TO_BE_REPLACED 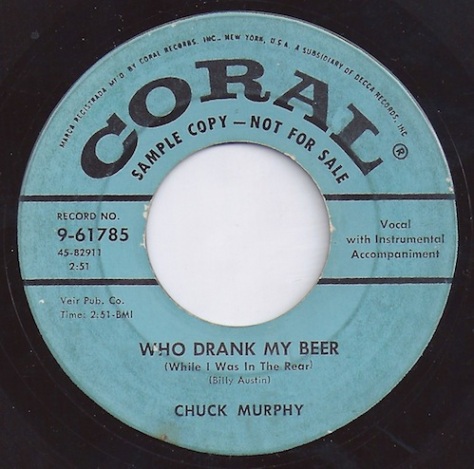 A few years back, I was musing about my father’s 45s record collection. For those of you too young, a 45 was a single vinyl record played on a “record player,” that had a turntable that rotated at 45 revolutions per minute.

For some reason, I was thinking about them again recently on a particular poor night of sleep (someone talking on speaker phone next door, two dogs barking, and a stiff neck from sleeping on the sofa to avoid the aforementioned, et al.)

Bill Carlisle and the Carlisles performing Bargain Days (Half Off) was released in 1955. You can listen to it HERE or HERE, and read the lyrics, written by Bill Carlisle, to boot. If I wanted to buy it on eBay, I probably could. The B-side was Nine Have Tried (and Nine Have Died), “and you’re gonna make it ten.”

As I noted previously, Dad also owned a version by someone performing Who Drank My Beer (While I Was In The Rear), written by a guy named Billy Austin, according to the label, though All Music attributes it to singer Dave Bartholomew. I didn’t know who performed it when I looked a few years ago, but I knew it wasn’t by Bartholomew [LISTEN], whose version is much bluesier; the one in my head was more country, and more comedic. It also was not the Tommy Duncan version [LISTEN].

I’m now positive that Dad’s 45 version was the one by Chuck Murphy from 1952, which you can LISTEN to, along with its B-side, Oceana Roll on CORAL 60800. The label was similar to the one shown, except it was orange. If I had any doubt, it was sealed when I heard the last line asking the bartender for “one on the house.”

None of the versions charted on either the pop charts or rhythm & blues charts, but I don’t have access to the country charts. Nor do I know which version, if any, was the original, though I’m guessing Bartholemew’s. This song has also been covered by Tom Ball & Kenny Sultan, and by Buster Poindexter. If any of you (meaning Dustbury) have any insight, I’d love to hear it. 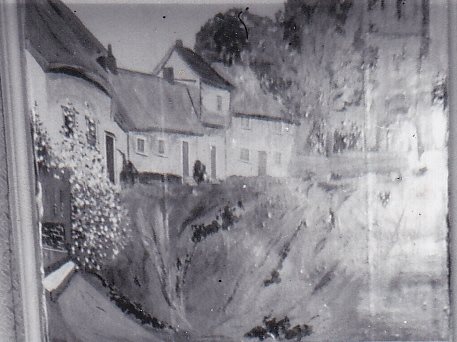 The first door was the outside door END_OF_DOCUMENT_TOKEN_TO_BE_REPLACED

One of the things I worried about when Lydia was born was whether I would be there when she grew up. After all, I was 51 when she was born, so I’ll be 70 when she’s 19.

What I had not seriously considered, beyond the normal concerns, is what if something happened to her. Her still mysterious illness in late February and much of March made me concerned because, as the doctors eliminated what it was NOT, I still did not know what it WAS.

It wasn’t until mid-May, though, that The Wife and I had a conversation with her about what she felt, I mean beyond the pain. END_OF_DOCUMENT_TOKEN_TO_BE_REPLACED 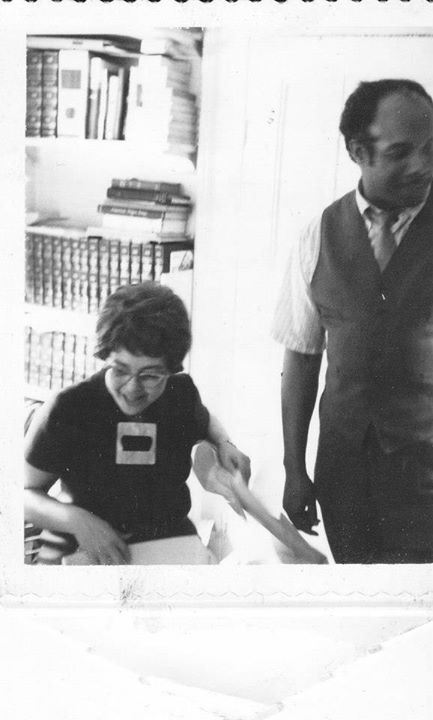 Right after I got back to Albany, after my mother’s funeral in February 2011 in Charlotte, NC, I attended the church service of my current congregation. It was Black History Month, and I had helped organize the events, but did not participate much in them. I’m standing in the congregation, rather than singing in the choir END_OF_DOCUMENT_TOKEN_TO_BE_REPLACED

My sister MARCIA found this and put it on Facebook: 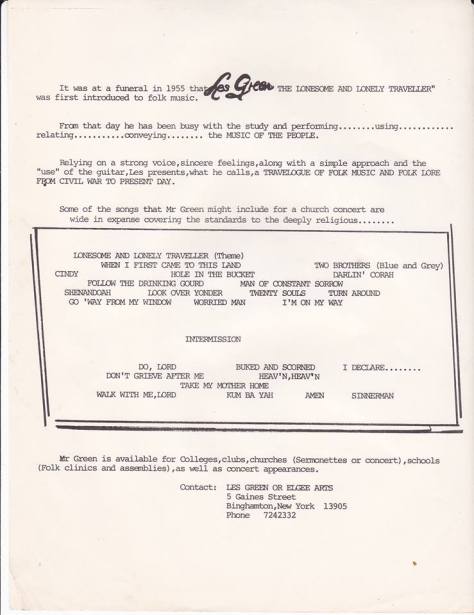 It’s a promo sheet my father created for himself as a “singer of folk songs,” never as a “folk singer,” which was too limiting a term for him.

I’m particularly interested in the set list, I’m guessing from late 1950s. Some of the songs he was still singing a decade later, when my father, sister Leslie and I sang together, while there are others (Twenty Souls) I don’t even recognize. I’m always fascinated to hear other people sing the songs he, or we, performed END_OF_DOCUMENT_TOKEN_TO_BE_REPLACED 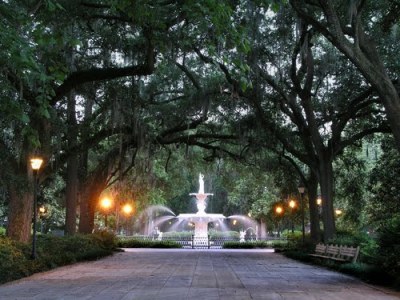 For my job, I used to go to the national conference of our association every year (far less so this century.) In the fall of 1998, the event was in Savannah, Georgia, this Atlantic coastal city that had a certain old world charm. Among other things, it was a walkable locale with a sense of its history.

My father, who was living in Charlotte, NC at the time, decided to drive down and visit me. It was about 260 miles and 4.5 hours away, but when he suggested it, I was all for it. I had come down on a Saturday, and while there was a mixer on Sunday, the conference did not start in earnest until Monday; it was just cheaper at that time to fly down a day earlier, even considering the hotel costs.

When my parents moved downstairs at 5 Gaines Street, Binghamton, NY, my paternal grandparents, McKinley and Agatha (nee Walker) Green moved upstairs. Her name, BTW, was pronounced a-GATH-a, not AG-a-tha. Yes, it is I who she is holding.

Grandma Green was almost certainly my first Sunday school teacher at Trinity A.M.E. Zion Church, only a couple short blocks from our home. She had a certain refinement and bearing. While my maternal grandmother would nag me, this grandma gave me the parameters she expected, and I pretty much did it.
It’s rather like some Bill Cosby routine END_OF_DOCUMENT_TOKEN_TO_BE_REPLACED 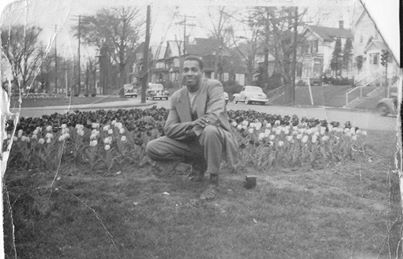 About five months ago, I dreamed that my father had ordered a bunch of nondescript raw materials in long, brown cardboard boxes. He was convinced that would resell them and make himself rich.

At some point, he decided that we (he, my daughter, and I) had to drive into Canada. END_OF_DOCUMENT_TOKEN_TO_BE_REPLACED

Dustbury noted that he and I have something in common: we are both magpies. As he put it: “The Eurasian magpie… is wicked smart, especially for a bird… I am not quite sure how “magpie” became a descriptor for humans who flit from topic to topic, unless it has to do with the bird’s tendency to be attracted to Shiny Things, but I’m pretty sure I fit that description, and I have several readers who seem to do likewise.”

The problem with that is that I often move onto the Next Thing, less out of boredom, but the need to find something mentally Shiny, I suppose. Intellectually, at least, the phrase “Jack of all trades, master of none” is pretty true of me. I know very few things in depth, but I know a little about a lot of things.