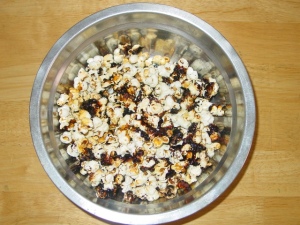 By demand from Island Rambles. I mean Shooting Parrots asked for it, but IR INSISTED!

When I was forced to get rid of my microwave by my lovely bride after we got married and moved in together, one of the things I most missed was making microwave popcorn. Now Carol would say, “Oh, you can make popcorn on the stove.” Well, no; maybe SHE could, and occasionally/rarely she did, but I could not, unless you considered creating a smoky and scorched pot, oddly filled with burnt popcorn AND unpopped kernels, “making popcorn.” I used the oil, even moved the pot as instructed but to no particular success, unless the goal was to make a mess without having a satisfactory culinary outcome. It’s OK to mess up a lot of pans if there’s a payoff, but without one…

I must have mentioned me missing this appliance at a gathering of her birth family, around Thanksgiving or Christmas of 1999. When we all got together for Mother’s Day the next year, they brought ME a box of microwave popcorn, which I accepted graciously. This was just the wrong response for them.

What I was SUPPOSED to do is kvetch, “But we don’t have a microwave! What am I to do with this?” At that point, they were going to then give us a microwave, which we could use in the new house, where we were going to move into the following week, and there would as room for it. Instead, I figured to just use the microwave popcorn at work.

Finally, the following weekend, they brought us the new microwave, as a first anniversary/housewarming present, disappointed that they did not have a little fun at my expense. Indeed, inadvertently, I had some fun at THEIR expense, and I wasn’t even trying.

AND, after very little practice, I almost NEVER burn the popcorn.

LISTEN: Buttered Popcorn by the Supremes