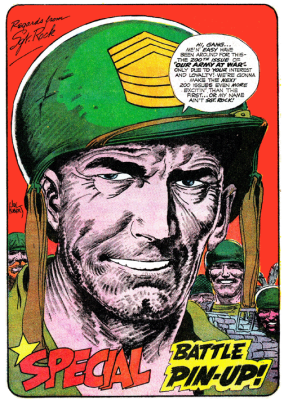 Joe Kubert, a comic legend best known for his DC war comics, died Sunday morning at the age of 85. Read this piece by Christopher Allen with links to other articles. Here’s a piece by Mark Evanier, plus ADD’s controversial take.

Steve Bissette, who was a student at the Kubert School, writes To Joe, With Love: A Sad Farewell to the Man Who Opened All the Doors. He also wrote on Facebook:
“If you want to do something to express your feelings or help, donations can be made to the Multiple Myeloma Foundation in Joe Kubert’s name; sympathy cards or notices can be sent to the Kubert family c/o the Kubert School, 37 Myrtle Avenue, Dover, NJ 07801. In all ways, be kind.”
***
This story depressed me thoroughly END_OF_DOCUMENT_TOKEN_TO_BE_REPLACED

I’ve been rereading the extensive list of shows that will be on ABC and CBS and NBC and FOX and the CW. I came to the conclusion that there probably isn’t a single new show that I’ll start watching. I’ve ODed on police procedurals, the comedies don’t sound particularly funny, and the few shows I might have given a chance to END_OF_DOCUMENT_TOKEN_TO_BE_REPLACED

Looking for something else, I discovered that TODAY is the 60th anniversary of the first U.S. color telecast. “On June 25, 1951, with 12 million TV sets in existence, of which only two dozen could receive CBS color, CBS made history by presenting an hour long color TV program hosted by Ed Sullivan and Arthur Godfrey with 16 stars that performed song, dance and comedy routines.”

As this article notes, “Earlier attempts to create marketable color broadcasts had been hampered by the FCC’s insistence that any color signal be readable by existing black and white sets as well. Even though the CBS color transmission system was not compatible with most existing televisions, the FCC approved it as the U.S. standard in 1950… END_OF_DOCUMENT_TOKEN_TO_BE_REPLACED

Today is the 20th anniversary of the classic last episode of the TV series Newhart, which the local CBS in the Albany-Schenectady, NY area cut off 30 seconds too soon. Watch Bob Newhart talk about the Last Newhart.

It got me to thinking about TV events that were interrupted. Surely, one of the most significant is the so-called Heidi Bowl, which I was ALSO watching. END_OF_DOCUMENT_TOKEN_TO_BE_REPLACED