And in an act that defies logic, I am now answering questions that New York Erratic answered for me, even though I gave them to her, based on questions Lisa posted, and which Dustbury also answered… Oh never mind.

1. What is your dream vacation spot and why?

It would be a place by water, preferably running water, like a river or a waterfalls, because I love water; maybe it’s the Pisces in me. It would be neither too hot or too cold. Maybe END_OF_DOCUMENT_TOKEN_TO_BE_REPLACED

New York Erratic, who needs to use her blog as therapy more often, wants to know:

Who was your worst landlord ever?

I’ve lived in over 30 apartments in my life, and most of the landlords I don’t much remember, one way or another. I suppose I can name the ones who I got miffed with:

Descendants of Solomon Northup, who recounted his story in a memoir, 12 Years A Slave.

The Real Origins of the Religious Right. “They’ll tell you it was abortion. Sorry, the historical record’s clear: It was segregation.”

Dustbury points to an article about how the ineptitude of the Department of Veterans Affairs, and its predecessors, go back nearly a century.

The Worst Argument Ever Made Against Gay Marriage.

Amy Biancolli’s book: To plunge is to live. Also, her parents in love.

Judy Sanders, former local news reporter and photographer, is dying of ovarian cancer. Confronting the long goodbye from Paul Grondahl, and a piece by her former colleague, Ken Screven.

Diane Cameron’s blog Love in the Time of Cancer has been going on since 2008, but I just discovered it.

Getting kicked out of the prom.

New York Erratic asked: “Have you ever dated anyone who turned out to be gay?” END_OF_DOCUMENT_TOKEN_TO_BE_REPLACED

So I answer New York Erratic’s question about romance, about me being a good listener. Yet I seem to have disappointed: “That wasn’t the answer I was expecting for the ‘getting girls’ question, but it makes tremendous sense when I think about it.” But I wasn’t some smooth talkin’ dude.

Still , I wrote, in an e-mail titled I’ll take another shot, if you give me parameters: “Not sure what kind of answer I could give you about romance. Among other things, I hardly ever pursued a woman, because I’m painfully shy. So she had to be a friend at some level first…” (Indeed, Dustbury speaks well of the anxiety guys like me experienced all the time.)

The reply: “I think you gave a great answer, but I was thinking more like skills or knowledge. Music always thrills me, as does trivia and poetry. 🙂 I know you don’t write poetry, but hasn’t any girl ever said END_OF_DOCUMENT_TOKEN_TO_BE_REPLACED 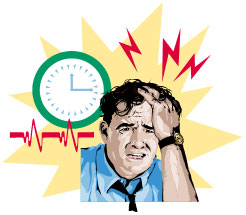 What was the greatest stress in the last year?

And the answer, had I written it at that moment would have been: “IT’S RIGHT NOW!”

I’ve alluded to The Daughter’s mysterious ailments, which have been largely mitigated and only partially explained, and would take a lot more detail to discuss, involving talks not only with doctors, but with school officials about making accommodations for the fact that she missed so much classwork. END_OF_DOCUMENT_TOKEN_TO_BE_REPLACED 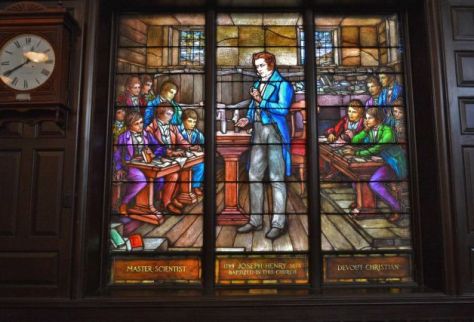 Who is your favorite visual artist? Favorite director?

I tend to be rather catholic about these things. Here’s the best way to recognize the artist of paintings, BTW.

My church has Tiffany windows, which I like; the one above is one of them. Gordon Parks is a favorite photographer. Always though Frank Lloyd Wright’s buildings were interesting, if not always practical. Van Gogh I enjoy, but there are so many more; I love going to the house in the Hyde Collection in Glens Falls, NY because it’s so eclectic. Did one of those Facebook things where you should live, and it came up with French Polynesia, which reminded me that I like Gauguin too.

But I guess my favorite visual artist is Rodin, whose work I find sensual as all get out, even if it isn’t all his work.

I took this list of a list of the 50 greatest directors of all time. Of all the directors whose films I’ve seen more that three END_OF_DOCUMENT_TOKEN_TO_BE_REPLACED

Well, since I never grew up gay, it’s kind of tricky to say. But I’ll try.

In my collective of high school cohorts, the politically involved, left-of-center, antiwar demonstrating, civil rights supporting folks, we formed a club called the Community Action Forum. But outside of school, we were friends called Holiday Unlimited, and our motto was “a splendid time is guaranteed for all, stolen from the Sgt. Pepper album.