This is what I thought before the Oscar nominations came out: Lincoln would win Best Picture and Ben Affleck would win Best Director. Then Affleck inexplicably wasn’t even nominated for Best Director, though he was for Best Actor; he subsequently won Best Director in the Golden Globes, and more importantly, the Directors’ Guild. Now I’ve pretty much switched the two places. The picks here are who I THINK will win, not who I WANT; sometimes, such as in the Best Actress category, I haven’t seen enough of the performances to have a rooting interest.

* means I saw that movie

If there is a mortal lock this year, it’s Day-Lewis, who BECOMES Lincoln, just as he has inhabited every other role he’s played.

It’s rare that The Daughter has gone to the Spectrum Theatre in Albany; in fact, I’m not sure she’d EVER been there. While it is the preferred film venue for the Wife and me, it often has films not suitable for sensitive eight-year-olds. But the ads said that the films nominated for Academy Awards in the animated shorts category were “family-friendly.” This is useful to know, because we saw last year’s entries, and A Morning Stroll most certainly NOT Daughter-friendly, to say the least.

On Washington’s Birthday – which was when the Wife and I went last year; a holiday tradition? – the three of us sojourned to the cinema. In previous years, they just showed the movies, but this year, there was interspersed conversations with William Joyce and Brandon Oldenberg, who created last year’s well-deserved winner, The Fantastic Flying Books of Mr. Morris Lessmore [watch it]. In fact, one of these guys looked a bit like Lessmore. They talked about the struggle to get their film made and the surreality of Oscar night.

Maggie Simpson in The Longest Daycare

I lost a dollar this week. A blogger I know bet that no one would be elected to the Baseball Hall of Fame, and regrettably, he was right. Even allowing the “punishment” of those who allegedly took performance-enhancing drugs, there were plenty of qualified candidates (starting pitcher Jack Morris, the totally undervalued reliever Lee Smith, for two). This was an unfortunate outcome, and not so incidentally, will be lousy for tourism in Cooperstown this year.

My wife and I were in Oneonta, NY for the holidays, visiting the parents-in-law. They watched the Daughter while The Wife and I went to the local mall to see the movie Les Miserables.

I should note that I have never seen the musical, though, in fact, we will later this spring. Missed the 1998 iteration of the film with Liam Neeson and Gerard Depardieu. Not familiar with the songs at all, except one. Didn’t even know the story beyond the fact that some character named Jean Valjean went to jail for a long time for stealing bread. I had read some reviews suggesting that it was wonderful, but others, such as the one by Ken Levine, that indicated that some in the cast, notably Russell Crowe, playing Javert, the official who pursues Valjean, could not sing. It took me a while to figure it out: many of the more critical opinions were based on their notions of the characters based on what they experienced before. END_OF_DOCUMENT_TOKEN_TO_BE_REPLACED

I had thought they had already gone away, but discovered that the Oscar-nominated live-action shorts were still playing at the Spectrum Theatre in Albany. So, taking advantage of having a child sitter, the Wife and I went to the movies a week ago Sunday.

Damian, who messed up his last chance to serve as an altar boy, gets a reprieve, with the carrot of getting to watch his beloved football. The pep talk one priest gives to the altar boys was reminiscent of a sports coach’s pep talk before the Big Game. Slight, but extremely funny.

The most serious of the five films. END_OF_DOCUMENT_TOKEN_TO_BE_REPLACED

It was a Monday holiday. The daughter was at a friend’s house. But the Wife and I had a narrow window if we wanted to see a movie. In the time frame we had, we could really only go to the Spectrum and see the Oscar-nominated short animation films. My wife was wary because she had heard that a couple of these films were quite violent. In fact, only one was.

Dimanche/Sunday (Canada – 9 minutes)
Every Sunday, it’s the same old routine! The train clatters through the village and almost shakes the pictures off the wall. In the church, Dad dreams about his toolbox. And of course later Grandma will get a visit and the animals will meet their fate.
And the train is HUGE! But I didn’t see the point. I suppose there was violence in this story, but it was rendered so banally that it wasn’t particularly affecting.

A Morning Stroll (UK-7 minutes)
When a New Yorker walks past a chicken on his morning stroll, we are left to wonder which one is the real city slicker.
The winner of the BAFTA, the British equivalent to the Oscars, this shows the changes of people over time. THIS film is the one with quite violent images. Great last joke, though.

Wild Life (Canada – 14 minutes)
Calgary, 1909. An Englishman moves to the Canadian frontier, but is singularly unsuited to it. His letters home are much sunnier than the reality. Intertitles compare his fate to that of a comet. END_OF_DOCUMENT_TOKEN_TO_BE_REPLACED

Now I get it. All the reviews that say that Meryl Streep is great as Margaret Thatcher, first female Prime Minister of England, in The Iron Lady, but the film, not so much, are pretty dead on. This movie starts off with a way-too-long bit with the aging Thatcher talking to her dead husband Denis (Jim Broadbent). It flashes back to the young Margaret Roberts (Alexandra Roach), daughter of a grocer with political ambitions, supported in this effort, at least in theory, by young Denis Thatcher (Harry Lloyd). Then back and forth between the elderly Maggie’s recollections and Thatcher (Streep) dealing with policy END_OF_DOCUMENT_TOKEN_TO_BE_REPLACED 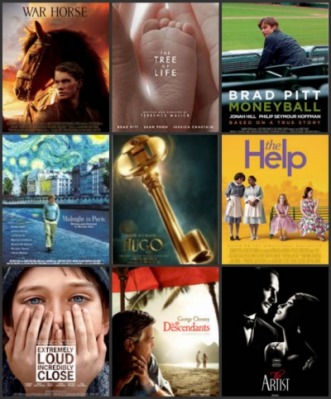 I tend to think of movie years from Academy Awards night to Academy Awards night, not so much because I’m an Oscars fan – though I am – but because some of the movies that get nominated don’t even make it to small markets such as Albany, NY until January or even February. Yeah, I know the Oscar nominations were very conservative this year, for the most part.

*means I have actually seen it

Saw 6 out of 9, so far, 3 in the last couple weeks. War Horse is still playing, so maybe I’ll still see it. I’d love to watch Moneyball, which is available on DVD.
WILL WIN: The Artist, which I liked. It’s a film about film. I mean, so is Hugo, but not as directly.
WANT TO WIN: Midnight in Paris, or The Descendants
PLEASE! NOT: Extremely Loud & Incredibly Close

During the trivia contest in which a friend regularly participates, one of the categories was ‘movie title anagrams’. Since it’s Oscar week, see how many you can get in the same allotted ten minutes.

I won’t approve any quiz answers for the first 24 hours, so everyone will be on equal footing.
***
I had written about my early Oscar picks here four weeks ago. I had intended to see several more films in the intervening time, but life (and death) got in the way. The only full-length movie I’ve seen since then is Blue Valentine END_OF_DOCUMENT_TOKEN_TO_BE_REPLACED

It was Valentine’s Day. The wife and I had a long-standing commitment for a child sitter, and movie passes for The Spectrum Theatre in Albany. Obviously, my grandiose plan to see more Academy Award films had put aside in the past two weeks, so seeing a nominee was my preference. But what? She didn’t want to see True Grit. Watching Blue Valentine, a movie about a disintegrating romance, didn’t seem quite right. Nor did seeing separate movies – she wants to see The Social Network, I The Black Swan.

So we decided to see five movies instead, those Oscar-nominated for best live action short films. The descriptions are from Oscar.com.

The Confession – Tanel Toom (UK-25 minutes)
“A young boy preparing for his first confession worries that he has no sins to report, so he enlists a friend’s help in committing one.”
And it’s a pretty minor one, actually, but one that has consequences. Moody, with a bunch of pointed symbolism, well acted, especially the lead boy. I’m told it’s got the Oscar buzz. A brief clip.

Wish 143 – Ian Barnes and Samantha Waite (UK-24 minutes)
“When a terminally ill young boy is granted a wish by a charitable foundation, he makes a surprising request.”
Actually, he’s an older boy, though not an adult, and what he wants is not to die a virgin, which is a bit of a conumdrum to his priest friend. It has humor and pathos, and it was my favorite of the five. A clip.

Na Wewe– Ivan Goldschmidt (Belgium-19 minutes)
“In 1994, as the Rwandan genocide spills over into neighboring Burundi, a bus is attacked by a group of rebels.”
Very tense; I was awaiting the slaughter, yet imdb called it a comedy? Well, maybe a subtle comedy. Na Wewe means You Too in Kirundi. Looks like the kind of film the Academy would like. A clip.

The Crush -Michael Creagh (Ireland-15 minutes)
“Eight-year-old Ardal has a crush on his teacher and is devastated to learn she has a fiancé.”
And Ardal finds the fiancé unworthy and calls him out. My wife’s favorite film. A clip.

God of Love – Luke Matheny (US-18 minutes)
“A love triangle between two musicians and a young woman takes a surprising turn when one of them finds a collection of magical darts.”
Appropriate for Valentine’s day, though probably the most lightweight of the five. Feels Woody Allenesque somehow. The trailer.

Unsurprisingly, all of the filmmakers are first-time nominees. “The Academy’s entire active membership is eligible to select Oscar winners in all categories, although in five – Animated Short Film, Live Action Short Film, Documentary Feature, Documentary Short Subject, and Foreign Language Film – members can vote only after attesting they have seen all of the nominated films in those categories.”