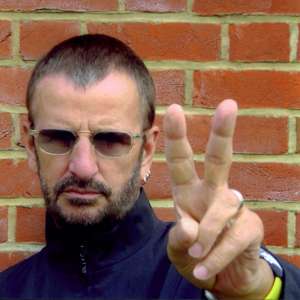 I decided, for reasons not entirely known even to me, to mark the birthdays of both of the surviving Beatles each year.

In the case of Ringo Starr, he took a bit of heat for apparently dissing his hometown of Liverpool, England, a comment he said was just a joke. “I love Liverpool,” said the drummer on a recent UK TV interview. He and Liverpool have kissed and made up.

Ringo, who Paul McCartney believes should be knighted, is my daughter’s favorite Beatle, and the one Beatle she constantly identifies correctly in photos.

Did I ever mention how I play my Beatles music through the year? END_OF_DOCUMENT_TOKEN_TO_BE_REPLACED

I decided that, for all four of the Beatles, I would list my Top 10 favorite songs on their 70th birthdays, or in the case of John and George, what would have been the big seven-oh.

Ringo is easy, because I have relatively few of his albums, as well as a live triple-CD anthology and a greatest hits collection. This will NOT include any live versions of his old Beatles tunes.

10. It’s All Down To Goodnight Vienna – a most peculiar song by John Lennon, who plays piano, with odd scansion to boot. jl-piano.

8. Oh My My -featuring background vocals by Martha Reeves and Merry Clayton, those great Billy Preston keyboards, and Tom Scott on the sax.

7. Love Me Do. As obsessive Beatles fans know – guilty as charged – Ringo replaced Pete Best shortly before the Beatles went into the studio for the first time with producer George Martin. Martin, disliking Best’s drums, and unfamiliar with Starr’s, hired session musician Andy White to playing drums, relegating Ringo to playing tambourine. Ringo STILL seemed miffed by this while he, Paul, and George were making the Anthology albums and videos in the mid 1990s. This record is, I suspect, partially closure for the drummer.

6. Step Lightly, mislabeled as Six O’Clock; indeed, most of this YouTube guy’s Ringo videos are given incorrect titles. This is from the Ringo album and features the dancing feet of Richard Starkey, MBE.

5. Early 1970, a piece about the other Beatles at the time of the breakup. It is noteworthy that all of them play and write songs for Ringo, even as acrimony amongst the others festered.

4. No No Song. This always reminded me of a variation on Randy Newman’s Mama Told Me Not To Come. Ringo’s old drinking buddy, Harry Nilsson, does the backing vocals.
END_OF_DOCUMENT_TOKEN_TO_BE_REPLACED