LONG-time blogger Dustbury asks a question for this round of Ask Roger Anything:

If a purely arbitrary decision was handed down to the effect that you could no longer remain in upstate New York, where would you first consider going?

I’ve thought on this a lot, actually. It’s pretty much a process of elimination.

Not moving to anywhere there is no fresh water, so desert states such as Arizona, Nevada and New Mexico are definitely out. California – well, is the big earthquake still coming? END_OF_DOCUMENT_TOKEN_TO_BE_REPLACED

In the United States, there are eight states that begin with the letter M, tied with the letter N. But N has the advantage of descriptive adjectives New (Hampshire, Jersey, Mexico, York) and North (Carolina and Dakota); only Nebraska and Nevada are one-word states.

In 1963, ZIP Codes were introduced, although many large cities were divided into zones 20 years earlier. At the same time, the Post Office introduced two-letter abbreviations for the states, to accommodate space for the ZIP Codes.

The ones for the letter M tell stories about the states:

MA – Massachusetts. The mother of the country. END_OF_DOCUMENT_TOKEN_TO_BE_REPLACED 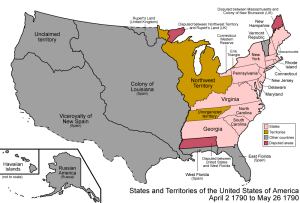 I saw this article recently in the Wall Street Journal about some people on Long Island wanting to secede from the rest of New York State for a bunch of reasons; it won’t happen, BTW, because the state legislature wouldn’t allow it. But it reminded me that the 50 states in the US were not always the size that they are currently.

Even before there was a United States, Massachusetts, New Hampshire, and New York all insisted that Vermont was a part their state. That’s why Vermont declared itself a kingdom in 1777, and Vermonters to this day refer to the state as the “Northeast Kingdom”, though it became the first state after the original 13.

In the early days of the Union: END_OF_DOCUMENT_TOKEN_TO_BE_REPLACED