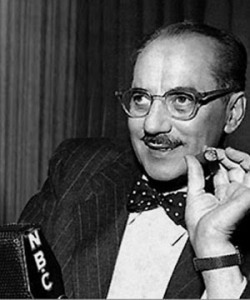 Somewhat along the lines of Sunday Stealing, Wednesday Wickedness offers quiz-things, but with a twist: the questions are inspired by quotes from famous people, such as Groucho Marx:

1. ‘A black cat crossing your path signifies that the animal is going somewhere.”
What is a superstition that many have that you think is crazy?

I suppose that, by definition, most superstitions are crazy. The exceptions among the more popular ones are those about opening an umbrella inside and walking under a ladder, both of which I think are rather logical, I mean, I don’t want that paint bucket on the ladder landing on my head, do I? And saying “Bless you!” when people sneeze is more habit than superstition.

2. “A hospital bed is a parked taxi with the meter running.”
What were you in the hospital for the last time that you were admitted?

As I certainly have mentioned, I was in a car accident in June of 1972 in Endicott, NY, near Binghamton. I was in a stopped car at a red light and was getting out of the vehicle when another car rammed into the car I was halfway out of. This car was pushed forward into the car in front of it, but it being heavier, knocked me back. I was unconscious, and got taken in an ambulance to the local hospital, where I stayed for 36 hours or so. But my recovery took the bulk of the summer.

3. “Alimony is like buying hay for a dead horse.”
What payment do you make that seems ridiculous?

My cellphone, which I don’t use as much as the minutes I pay for; I mean I still HAVE them, but, barring unforeseen circumstances, I’ll never USE them. I should get another one, I suppose, but that would mean actually figuring out what plans/phones are the best for my wife and me, something for which I apparently have no capacity.

4. “Humor is reason gone mad.”
How would you describe your sense of humor?
END_OF_DOCUMENT_TOKEN_TO_BE_REPLACED