My old buddy Augustus (who you FantaCo customers might have known as Matt), put this together for my birthday. Pic on the left is from the cover of the FantaCon 1988 convention program, drawn by the late Chas Balun. The image is on the right was John Hebert’s rendition from Sold Out #1, c. 1986.
This is about me because: It was so cool. And he wrote: “Thank you for turning me on to a world of literature far beyond science fiction and fantasy. Your are still an influence on this boychik. Long may you arrange. (books in order).” And you thought I couldn’t blush.

Now Jaquandor KNOWS how to celebrate my birthday. He added me to his sentential links here. He answered my question about football.
This is about me, obviously. (Sidebar: some highly educated person wrote “As is my want” recently in a mass e-mail I received. You have NO idea how difficult it was for me NOT to correct him. Jaquandor would NOT make this misteak, er, mistake.)

Tom Skulan of FantaCo is being interviewed for Theater of Guts.
This is about me because: I worked at FantaCo for over eight years I took the photo of Tom, and also the pic of the late Chas Balun looking towards the ceiling. I find it interesting that my photos of the store END_OF_DOCUMENT_TOKEN_TO_BE_REPLACED

As I have noted, I’m not one much for nostalgia. I don’t long for the “good old days.”

Also, I used to think in terms of time being linear. You do this; this is over. You do that; that passes. On to the next thing. I’m more likely now to see things as parabolic, with events somehow coming back to re-inform one’s life periodically.

I do have a sense of history, though. That is why my friend Steve Bissette and I tried to fix some of the more egregious errors on the FantaCo Wikipedia page a few years ago. I worked at the comic book and film paraphernalia store/publisher/mail order/convention place at 21 Central Avenue in Albany from 1980-1988 END_OF_DOCUMENT_TOKEN_TO_BE_REPLACED 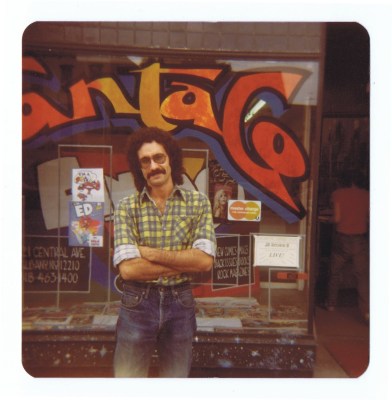 FantaCon, once an Albany tradition for fans of comic book, fantasy, and in its latter incarnations, horror films, is returning after a brief, two-decade hiatus. FantaCon 2013, operated by its original creator, Tom Skulan, will be held Saturday September 14 and Sunday September 15 at the Marriott Hotel on Wolf Road in Albany. Ticket for the related Three Nights of Horror at the Palace Theatre on September 11-13 in Albany, will be available from the Palace Theatre box office, starting on February 13.

FantaCo, the store/mail order company Tom started, operated from 1978 through 1998 at 21 Central Avenue, Albany, NY. I worked there from May 1980 to November 1988, worked at the first five FantaCons and attended the sixth.

There are three reasons that come to mind. First, I have always wanted to do another FantaCon when I wasn’t preoccupied with the store, the publishing and the mail order. I have always wanted to see what that would be like!
Second, time is creeping up on me and these old bones have only so much time left where I can handle the demands of the show. And finally I like the numbers of doing the show the weekend of Friday the 13th in 2013.

What is the theme of the upcoming convention? What guests have you lined up so far?

The guest line up confirmed at this time is END_OF_DOCUMENT_TOKEN_TO_BE_REPLACED

As some of you know, I worked at FantaCo, the comic book and film book store/publisher, et al in Albany, NY from May 1980 to November 1988, the second longest job I ever had. (The current one is #1.)

There will be a FantaCon in September 2013, the first one since 1990. I’ll be there, Allah/Yawweh willing.

You’ll note that Tom Skulan, the creator of FantaCo and FantaCon, has dedicated the show to the memory of three individuals. I KNEW THEM ALL.

Phil Seuling was one of those people that the term “bigger than life” was designed for. END_OF_DOCUMENT_TOKEN_TO_BE_REPLACED

Lisa from peripheral perceptions, who has very nice toes, writes:
You may have already been asked and answered this one, but…How and why did you get into blogging?

The HOW question I answered, among other places, here, specifically in the fifth paragraph; curse you, Fred Hembeck! The WHY I’m sure I’ve answered, but, to reiterate, it’s mostly because I was composing things to write in my head, I didn’t have a place to put them, and the subsequent noise in my brain got too loud; I blogged to stay (relatively) sane. Now it’s so I can “meet” people like you.
***
Thomas McKinnon, with whom I worked at the comic book store FantaCo, said:
Hey Roger
Tell us the story how you met Tom Skulan, and started working at FantaCo.
I have never heard the story.

Well, those are two very different things. I’m going to go back to the old days of comic book collecting, when you had to get your comics off the spinner racks at the local convenience store. I started collecting comics by early 1972 (Red Wolf #1 was cover dated May 1972, Luke Cage, Hero for Hire June 1972). My friend and I were at college in New Paltz, NY but we had to go to some little hole-in-the wall store on 44/55 in Highland, the next town over, to get our four-color fix.

At some point, maybe as early as 1973, a guy named Peter Maresca started a comic book store called the Crystal Cave, buying from a direct market distributor (Seagate? Bud Plant?) It was right across from a bar called Bacchus. It later moved a couple blocks.

The chronology fails me here, END_OF_DOCUMENT_TOKEN_TO_BE_REPLACED

There was a time when I used to buy into the notion that the past is past, and you move on to the next thing, as though life were some connect-the-dots puzzle, where you go from point A to point B to point C without ever doubling back. It’s not that I ever really thought that on my own, but that others suggested it, and I, for some reason, bought into it for a while.

I suppose it can be a useful tool, letting go of the past, when the past was awful. But when it was good, why forget it? (And I could make the case for remembering the less good as well.)

And some people don’t forget. Not that often, given the fact that I worked there 8.5 years, I’ve mentioned FantaCo, the comic/film book retailer/publisher/convention operator in Albany, NY. Even less frequently, I have mentioned Raoul Vezina, the house artist who also worked on publications for FantaCo END_OF_DOCUMENT_TOKEN_TO_BE_REPLACED