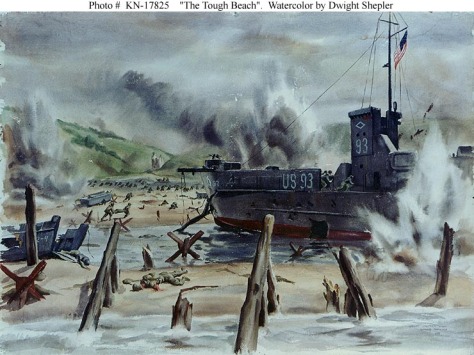 As D-Day approaches, all I can think about are 90-year-old men who saw awful things, but sucked it up to get through the events, and then stoically never talked about them. That is until 50 or 60 or 70 years later – goaded by family members or in recognition of their own mortality, as at least 600 WWII vets die EVERY DAY in the US – they start telling their stories. And while unique, they are the same story, of friends, of an officer who died that day, of bodies they tripped over while trying to maintain their position.

And, almost inevitably, they cry. They weep for those comrades they still know by name 70 years after they perished, tears that they weren’t allowed to shed at the time because it wouldn’t have been “manly.”

In some ways, it reminds me of the Holocaust survivors who blocked our the horror they saw until much later. They say “war is hell” for a reason. And that was a conflict generally supported by the American public, something I must say I’ve never really experienced in my lifetime; either initially or subsequently, Americans have grown weary of the wars we fought.

So World War II becomes “the good war.” As though there is any such thing.
***

All these people have written these great Maya Angelou stories, and cited her quotes. And while I’ve read a lot of great tributes to her, I don’t have one, and haven’t seen one, that exactly captures my feelings, though “Scandal” and “Grey’s Anatomy” show runner Shonda Rhimes tweeting simply, “Maya” is pretty close.

I mean, I remember seeing the 1979 TV adaptation of I Know Why the Caged Bird Sings, and only reading the book later. Or I could note seeing her in everything from Roots to Sesame Street to Touched by an Angel. Sometime recently, I even linked to her calypso singing. Unfortunately, I never met her, though I’m likely to have been as tongue-tied as Keef was.

But for me, she was just this FORCE, her speaking voice like music, her wisdom and compassion evident in every sentence. For decades she was like a grandmother talking, trying to relay important knowledge.

I bought for The Wife, probably for some occasion in early 2002 – Valentine’s Day or our anniversary – Hallmark tan/green pottery bowl with these Maya Angelou words inside: “Life is a glorious banquet, a limitless and delicious buffet.”

The morning Maya died, I was reading someone’s Facebook post, someone who was hoping that she would get better after she’d declined to attend some event in her honor. Then the Albany NBC-TV affiliate, WNYT, citing a station in Winston-Salem, NC reported her death. But still I waited until other sources confirmed it – and her Wikipedia post quickly noted her in the past tense – before I could really believe it.