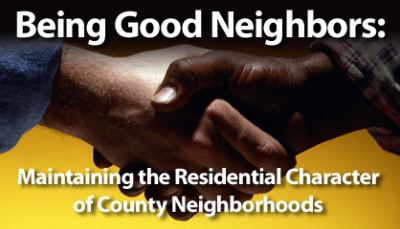 We have been in our house for 12 years as of May 8. Since that time, neither of our immediate neighbors live there anymore. On the one side, there were a couple sisters and their kids and their husbands or boyfriends. They were a tad uncouth, especially in the summer when I could hear the occasional profanity-laden tirades. But we got along well enough to negotiate the building of a fence between us, sharing the cost; the old fence was falling apart. (See MENDING WALL by Robert Frost.)

The guy now is a lot more quiet, and responsible. He seems to have a LOT of tenants, though, and I don’t know if they are relatives or boarders; if the latter, that’d be in violation of the city code.

On the other side was a great family. But the patriarch died. One family member bought a second house a few houses down, but then moved out of the original house. This guy who does not live there purchased the building, renting it out to three distinct groups of college students a couple years ago. The young women who lived there the first year were terrible. They might sit on the second floor porch and pour their half-drunk beer out onto the ground, which would inevitably spray in our direction.

But the guys this year were great. At the beginning of the school year, we were coming home and this college student was waiting for us so he could introduce himself, and his mother, to us. A couple hours later, he brought one of his roommates over to introduce him to us. We were in shock. Another guy engaged us while we were doing yard work. Ii actually knew them by name (Daniel, Andrew, Sam, among others), whereas the women last year, save one grad student who was living alone, wouldn’t even acknowledge our presence with a nod of the head. When we’ve had issues with the guys (cigarette butts on our lawn, a bit of noise), we were able to talk to them and the situation would be rectified.

So when they had a graduation party, they invited us over. We got to meet (or meet again) their parents, and other folks in their lives, including a writer from the local newspaper, Steve Barnes; one of the guys had an internship at the paper. I’m going to actually miss those fellows, and hope their replacements will be as civil.

Oh, and the former next-door neighbor let us use the electric lawn mower. I try to use the reel mower, but busyness plus rain can preclude that.
***
Richard Dawson died. I watched him on Family Feud – but his successors not so much – and also enjoyed him on Match Game and the comedy Hogan’s Heroes. Here’s a Hogan’s Heroes tunnel gag, and Dawson discussing meeting his wife on Family Feud.